Tipping Point: Defeat looks like the end for Tom Brady and the hated Patriots 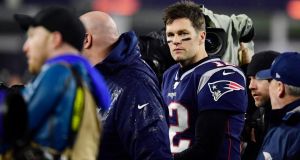 In the dark of a January Sunday morning, the light of the phone hurt the eyes a little. The healthier choice would have been to wake fully first, of course, maybe let the fog clear a little. Certainly it would have been a bit more New Year’s Resolutiony. But this couldn’t wait.

It was wild-card weekend in the NFL and the New England Patriots had been playing the Tennessee Titans overnight. The noise of a normal day-to-day means you can happen upon the result of anything now without wanting to. Best to hook it into the veins directly before real life has a chance to ruin it on you.

In that regard the NFL’s YouTube channel is one of the wonders of the sporting world. Every game is up there, distilled down to a 15-minute highlights package with, crucially, no mention of the final score to be seen anywhere except the final frame.

And so it was that the Tom Brady Patriots era came to its end in our house, as presumably it did for millions waking up around the planet, with curtains closed and the sound turned down.

Or at least it looked that way. Nobody knows for certain, of course. It may very well be that Brady will keep playing for the Patriots, but he was pointedly non-committal in the aftermath of their 20-13 defeat.

He’ll be 43 at the start of the next NFL season, and the only thing he would say for sure on Saturday night was that it was unlikely he would be retiring. As to whether or not he’d be suiting up for a 21st season as a Patriot, he refused to bite despite being asked a dozen different ways about it.

This was well flagged in the build up, and came as a surprise to nobody. When he signed a new two-year contract last August, it included a clause making him a free agent this coming March. From that point on the tick of the clock seemed to get louder and louder with every mediocre Patriots display, culminating with Brady throwing a last-ditch interception on his own goal-line as time ran out against the Titans. If it is indeed the end it was an uncharacteristically hapless one.

Not that anyone will be crying him or them a river. Brady’s 20 years at the Patriots have been defined by three things above all others – his own greatness, the genius of Bill Belichick and the level of downright hatred their team has inspired across the rest of the sporting landscape.

Serial winners are never popular in any sport, but very few in history have engendered the short of casual, workaday loathing reserved for the Pats.

Maybe that says more about the rest of us than it does about them. Hate is such a cheapened word in sport, after all. It gets thrown around like it’s normal, as if it makes perfect sense that you – sane, rational, take-the-bus-to-work you – have no choice in the matter when it comes to particular teams or sporting figures. Hate the Patriots, hate the Dubs, hate United, hate Rory McIlroy, hate whoever.

But it’s nonsense, really. Drill down into it with any degree of honesty and it’s usually just mild irritation gussied up into what you choose to call hatred because you like the pose it makes you strike.

And if it’s more than that, if you’re genuinely living in this world at this time and you’re wasting hate on a sports team rather than any of the infinite number of more deserving causes, then you might just have bigger problems than who wins the Super Bowl.

Nonetheless, the Brady/Belichick Patriots have been a bigger lightning rod for this stuff than any other team in any other sport for well over a decade now. They have been derided as cheats for their part in Spygate and Deflategate, a couple of rules violation scandals seven years apart.

The view that the transgressions in each case – filming opposition warm-ups and changing the pressure of the match balls to better suit Brady’s throwing preference – are pretty small beer in the scheme of things has never got much traction. They are winners and they are cheats, and in popular consensus the one doesn’t get separated from them other. Hence the general level of glee across America at Brady’s Patriots career looking like it has ended in such ignominy.

As to what happens now, the downtime between games as the NFL season reaches its crescendo will be filled with little else in the coming weeks. Brady has always been paid less than other top-tier quarterbacks in order to clear salary cap space to allow the Patriots sign a stronger all-round squad. If he goes elsewhere in the coming months he will presumably sign the biggest contract of his career.

In the early game on Saturday night, the Houston Texans quarterback Deshaun Watson pulled of a series of escapes, bull-runs and wiggle-throughs that owed everything to his pure 24-year-old athleticism. The all-action style of the likes of Watson, Russell Wilson of the Seahawks and Lamar Jackson of the Ravens is increasingly where its at. That’s not who Brady is, and it’s definitely not who he’s going to be at 43 and 44.

What happens to the Patriots is probably even more interesting. Belichick is 67 and going nowhere. He could conceivably be on the Patriots sideline for most of this decade, scheming and grouching his way well into his 70s. The suspicion, fairly or unfairly, has always been that it’s him who has made Brady great rather than the other way around.

Finding out one way or the other could make for a fun couple of years ahead.