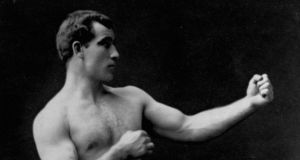 Pug’s pug: Tom Sharkey left Dundalk as a young man to join the merchant ships; he started to box after joining the US navy. Photograph: Library of Congress/Corbis/VCG via Getty

It was 118 years ago last Friday that Thomas Edison – yes, that Thomas Edison – employed 11 electricians to hang 400 lamps over a boxing ring at Coney Island Athletic Club, in Brooklyn, in service of his latest grand experiment. Nobody had ever filmed a boxing match under artificial light before, and if anyone was going to do it, Edison’s Biograph Film Company was always going to be among the likeliest contenders. Edison was not only the foremost inventor of his day – indeed of most days – but also a fight enthusiast.

This predilection for the fistic world had previously found slightly odd expression in the filming of cat fights – literal cat fights, in which he strapped miniature boxing gloves on to the paws of two housecats and filmed them pawing at each other in a purpose-built miniature ring. The footage is available today on no less eminent a resource than the website of the Library of Congress. All of 23 seconds long, it’s a cat video that predated the internet by almost exactly a century.

Anyway, the fight in Brooklyn on November 3rd, 1899, was all set to go except that the referee had a problem. Such was the heat from those 400 lamps suspended 4m above the ring that George Siler refused to take his place underneath them unless somebody gave him a hat. In the ring the temperature rose to 38 degrees as James J Jeffries of Ohio took on Tom Sharkey of Dundalk, Co Louth, in Jeffries’s first defence of his world heavyweight belt.

The scene is set in the boxing historian Thomas Myler’s new book, New York Fight Nights, in which Sharkey’s generally unknown but nonetheless rollicking life story is told in the opening chapter. Sharkey was giving up just shy of two stone in weight to the champ – and it told over the course of 25 gruelling rounds, at the end of which Jeffries took the decision and kept the belt. Above all, in the cruel heat of the ring’s lights, it was amazing that the two fighters could stay standing that long, never mind trading blows.

“Both boxers would later complain,” writes Myler, “that the light from the lamps put blisters on their scalps, even though a large umbrella was put over each corner as a shade during the intervals between rounds. Within a week, all their hair would fall out. Conditions were not helped by a sultry November evening. Newspaper correspondents and telegraph operators were stripped to the waist, ready for action which could well last for quite some time, considering the toughness and fitness of both gladiators.”

It did that. The 25 rounds took an hour and 40 minutes. Sharkey was floored twice in the second round but got up and kept coming without taking a count either time. Jeffries fractured his elbow knocking him down the second time – a recurrence of an old injury – but fought out the remaining 23 rounds without his Irish opponent knowing about it. Sharkey broke Jeffries’s nose in the 15th; Jeffries broke two of Sharkey’s ribs in the 17th, causing one of them to pierce his skin.

Known as Sailor Tom, Sharkey was a pug’s pug. He left Dundalk as a young man to join the merchant ships and had sailed all over the world by the time he left his teens. He enlisted in the US navy, and it was there he started to box. His innate toughness made up for whatever technical shortcomings he may have had, and he won his first professional bout, in Honolulu, on St Patrick’s Day 1893, when the USS Philadelphia was docked there. He knocked the British navy heavyweight champion Jack Gardner out in four rounds.

Sharkey lived a life. In the navy he was seen as a tough man, if not someone who could be mistaken for a smart man. One time, ahead of the wedding of one of the officers, he was told to go into town and buy a couple of two-pound bags of rice. His orders were to hide under the gangway ladder and throw the rice at the bride when she appeared.

Which he did. Except nobody told him to take the rice out of the bag first. As Myler has it, the blushing bride got a two-pound bag of rice straight in the face, knocking her to the floor, busting three of her teeth and sending her off on her honeymoon with a black eye.

As a fighter Sharkey had an estimable career. He got his shots, here and there, but generally found one too good for him when he went to the very highest level. He retired in 1904 with a 37-7-6 record and the lingering fondness of fight fans of the day, due to his incredible war with Jeffries under those lights in 1899.

There was a quirky coda to Sharkey’s time in the ring. Repeated punishment over the years left him with a cauliflower ear, which he became more and more sensitive about as time passed. It got to the point where he put an ad in the paper in New York looking for help. “I will pay the sum of $5,000 to the person who can provide me with a new ear, or do a sensible job with the one I have.”

That’s the best part of $150,000 in today’s money. Little wonder that 39 doctors came to visit Sharkey at his New York hotel over three days to take their shot at the title. In the end he skipped town before the surgery could take place, leaving the chosen doctor and gathered reporters to wonder where he’d disappeared to.

Turned out Sharkey was in Chicago, deciding to live out his days with his cauliflower ear. A badge of honour for the fight career he’d endured with such admirable hardiness.