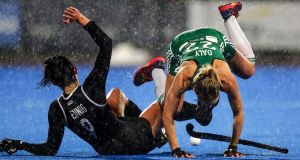 Watching the poor unfortunates cowering from the baleful skies at the hockey on Saturday night, the thought occurred that we’ve been looking at the 20x20 campaign in entirely the wrong light.

Oh sure, it’s a dandy idea on paper. By increasing the exposure dedicated to women’s sport, by really pushing the big events across the sporting calendar and making them the hot ticket in town, it follows that you will draw more and more young girls into the web.

And it’s working, no question. You only have to look at the attendance figures at the hockey, at the camogie final, at the women’s football final – on another apocalyptic day, don’t forget – to see how effective the campaign has been. The numbers are up, sky-rocketing past expectations.

In that light this column suggests – demands, in fact – that the organisers be brought in front of a tribunal and made to answer for themselves without delay. The young girls of Ireland must be saved before it’s too late. They did nothing to deserve having a life of sport imposed upon them, and those responsible must hang their heads in shame. Sackcloth, ashes, the whole deal.

At the very least the 20x20 people ought to be made hand out pamphlets before these games making it clear what the new recruits are getting themselves into. In the interests of balance they should, of course, concede that sport has been known to occasionally provide a fleeting moment of diversion, the odd split-second of joy here and there. But come now, let’s tell these young ladies the truth as well.

Sport is hell. We know this. We have lived this. Sport is sitting in the pissings of rain with your hands too cold to get purchase on the zip to pull it any higher up your chin.

It’s trying to find a squinting letterbox, that precise angle at which to tilt your umbrella so that it keeps out the slanting hailstones but doesn’t obscure the action. This is, of course, impossible. If you possessed the dexterity to manage it, you would be out on the pitch making a name for yourself. You’re not. You’re wet and cold, and your brolly is annoying everyone around you.

Sport is misery. You may as well be told this now. By signing up you are subjecting yourself to a lifetime weighed down by hope, vast decades of your existence crippled by optimism. You will lie to yourself constantly, spinning a web of deceit that you wouldn’t swallow from anyone else for a second. You will tell yourself sport is a good thing in your life, against the weight of available evidence.

You will pick a team. You will pick a few teams. In some cases the teams will pick you, as the pressures of location or parentage leave you with no choice in the matter. Advising you to resist this impulse is pointless. We can only make a pencil sketch of the future – it’s up to you to choose how you colour it in. But it would be wrong to leave you wandering the desert, all the same. You need to be told this stuff.

Over time you will curse the day you manacled yourself to those teams. You will stare out over the grey expanse of an emptying stadium and ask yourself why you bother. You will make a quiet, cold promise to stop leasing responsibility for your self-worth to people who can’t kick a 20-metre free. You will fail and you will feel worse because of it. You will tell nobody.

Sport is voracious in its appetites and stingy in its largesse. Sport knows it can treat you with the sort of off-hand cruelty that would get a prison warden suspended without pay and still keep you from wandering off.

You will examine the deal you have made and realise that you have been seen coming. Sport will shrug its shoulders and point you towards the terms and conditions.

The worst of it is that sport gives you the illusion of free will. Sport is haughty in its indifference. It won’t coerce you, it won’t put the slightest pressure on you to submit. You can leave anytime you wish. It is entirely in your gift not to bother with sport – all you have to do is decide for yourself that you can do without it. That’s on you.

Even if you do make that decision, sport never goes away. It’s like one of those Hanna-Barbara cartoons where you are the train and sport is the track being constantly laid down just that uncatchable few feet ahead of you. It would be nice to think you could take one step to the left or right and alight on a different platform, one where sport kept itself to itself. But that’s not how it works.

Sport is always there. The seasons seep into each other like oceans, each sport claiming another chunk of the next until you can’t keep track of where one starts and the other finishes. Did you know that a quarter of the Pro-14 season is over already? Sport has no reverse gear.

Once you know this, you know it in your bones. You can’t unknow it. You can’t pretend as if the 15 minutes around five o’clock on a Saturday is just a normal time of the week. You can’t stroll through a summer Sunday afternoon like nothing important is happening. It would be easier to pretend the sky doesn’t exist.

There will be people close to you who are oblivious to sport. Those people will be family members, spouses, line managers and so on. They will not respect you for your interest. They will find it an irritant at best, and more likely a genuine character flaw.

They will have a clear view of sport and won’t understand why you didn’t get over it years ago. You will stumble over your words anytime you try to explain, and they will roll their eyes and think you a loon.

It is incumbent on the 20x20 campaign to face these facts before it is too late and to act accordingly. It has been an appalling success, an atrocious triumph. For the sake of our young women its genius cannot be allowed to fester.