Conor McGregor fans are the touchiest and whiniest in sport 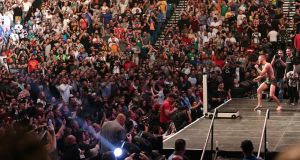 Conor McGregor during the UFC 196 weigh-ins at the MGM Grand. Photograph: Getty

Touchy lot, these UFC fans. You’d have thought that a sport in which the ability to give and take insults plays such an apparently crucial role in fight prep would attract a thicker-skinned constituency. But no, they were out in force once again last week, hyperventilating over Sonia O’Sullivan’s Thursday column.

“When the end goal goes beyond sport and enters the death zone,” went Sonia’s last line, “then I have to question: is it really sport?”

Note, she didn’t ask whether or not mixed martial arts is “a” sport. She wasn’t dismissing it as a phenomenon or saying anything at all about the people who take part in it, watch it or love it. Just a perfectly reasonable, nuanced, even philosophical question that she felt she’d like to ask.

“Myopic.” “Ill-informed.” “Shows how little you understand.” And that was just the first comment on the website below the line.

Thereafter, she was accused of selling misinformation to the masses, of being shallow, of showing her ignorance and, hilariously, of “not understanding men at all”. Hey, we all have our struggles on that score.

This is de rigueur, of course. Nowadays, the slightest questioning of MMA or its commercial tail-wagger behemoth the UFC always attracts the same sort of response. Condescending, defensive, a bit mansplainy, slightly hurt without wanting to show it.

“Educate yourself” is the most heavily employed phrase in a UFC fan’s vocabulary online, as though they were taking a stand for a particularly dense new Radiohead album. There are particle physicists who claim less complexity for their life’s work than an MMA fan talking about jiu-jitsu.

What’s surprising about it is the change in tone from the early years. Back in June 2007, the first UFC event to come to these shores sold out Belfast’s Odyssey Arena for UFC 72. The sport was young and still getting its legs out from under itself on this side of the Atlantic so they were happy for the coverage and gave plenty of access.

The abiding memory from that night was getting into the dressing room of Eddie ‘The Manic Hispanic’ Sanchez about 40 minutes after he’d stopped Ballymena’s Colin ‘Big C’ Robinson 30 seconds into the second round. Robinson had started strong but faded to allow Sanchez off the hook but even though it had been a short fight, both of them were still in ribbons when Robinson came in to ask Sanchez how he was doing.

“I’m f**ked, man,” said Sanchez, barely fit to lift his head from between his knees. “How about you?”

“The same. Thought I had you.”

“Yeah. Me too. We’ll get a Guinness later, right?”

“Aye, definitely. Here, I have an oxygen mask back in my dressing room. Doctor gave it to me. You want a go of it?”

“Shit man, that might not be a bad idea.”

Whatever misgivings you may or may not have had about the legitimacy of the sport or the spectacle it made of itself, it was impossible to watch that exchange and not respect the men in the arena. And anyway, at that point in time, the UFC and its fans weren’t overly interested in what you thought of it. Dana White, the organisation’s president, had sat down for an interview earlier in the day and made that very clear.

“Look, the truth is that there’s always going to be people who don’t like fighting,” said White.

“That’s fine. Guess what? I hate golf. I think it’s the dumbest f**king game ever. It’s ridiculous and I don’t get it but that doesn’t mean it shouldn’t be on TV and that people shouldn’t have the chance to watch it. I don’t like it, I change channel. People who don’t like UFC can do the same. There’s a thousand channels and room for everybody.”

White would doubtless say the same these days but you have to wonder why so many of his acolytes adopt such a shrill, offended posture any time someone has a go at their sport.

Particularly since all indications are that they’ve already won the argument. Say what you like about MMA and the UFC, the sport isn’t going anywhere anytime soon.

Much as polite society might wish it away, the UFC has dropped an anchor in the consciousness of young men their 20s that will take a fair bit of uprooting. They live their lives in six-second vines and in the UFC they have the perfect combination of violence, body image, wealth and celebrity, all glossily packaged and sitting in their pocket, available at the swipe of the screen.

Conor McGregor didn’t create that generation, he just came along at the right time to take advantage of them. Kenneth Egan was another who had to pop the umbrella and cower under the torrent of invective that came his way over the weekend for suggesting that the sport will fizzle out after McGregor is gone. Is he right? Who knows?

A personal view is that the glitz of the UFC has done enough to drop the seeds of a dream in enough young minds to sustain it long after McGregor has moved on. It won’t be first on the RTÉ sports news, as it was last Sunday morning, but it will be around. Just like all minority sports, it will bubble up and it will simmer down and it will have its followers.

We can only hope that they get a bit less whiny as time goes by.