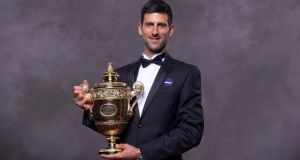 Serbia’s Novak Djokovic posing for a photograph with his trophy at the Champions Dinner. Photograph: Getty Images

At the end of this seesawing and tempestous epic, which was not only the longest final in Wimbledon history but perhaps its most dramatic, Novak Djokovic pointed one finger to the sky in triumph. He might as well have been waving it in defiance at the Centre Court crowd, who had spent four hours and 57 minutes willing and baying Roger Federer to victory.

Afterwards the Serb explained that he had tricked his mind so that every time he heard “Roger” he felt that people were actually cheering for him. “If you have the majority of the crowd on your side, it helps, it gives you motivation, it gives you strength, it gives you energy,” he admitted. “When you don’t, then you have to find it within. I like to transmutate it in a way. So when the crowd is chanting ‘Roger’ I hear ‘Novak’. It sounds silly but it is like that. I try to convince myself that it’s like that.”

It was not the only trick Djokovic pulled off to win his fifth Wimbledon title. He was the worse player for four of the five sets. He did not conjure a break point until deep into the fourth. He was down two match points at 8-7 in the fifth. His opponent served better, volleyed better, returned better, hit 40 more winners and won 14 more points. And yet Djokovic still emerged victorious. Brad Gilbert once wrote a book called Winning Ugly. This was the director’s cut.

Afterwards the Serb admitted he was on the back foot for most of the match. Yet the way he was able to raise his game in each of the three tie-breaks while Federer slipped into his shell was deeply impressive. Djokovic’s fifth Wimbledon symphony might have been discordant but in some ways it was his most glorious.

It also enhances his bragging rights. For in the decades ahead, when talk turns to who was the greatest, Federer, Djokovic and Rafael Nadal know their names will be rattled out fast and furiously. But Djokovic now has 16 titles, closing in on Federer, who has 20, and Nadal, who has 18. And at 32 he knows that time is on his side.

Afterwards he issued an ominous warning to his great rival. “Roger hopes to inspire people to keep going at 37,” he said. “I’m one of them. The fact that they have made history of this sport motivates me as well, inspires me to try to do what they have done, what they’ve achieved, and even more.”

Federer made his aggressive attention clear in his opening service game, with two aces and a rasping forehand winner. The Swiss continued to have the better of the first set only to falter in the tie-break. The crowd were deflated. They, like everyone else, had felt that the best chance Federer had was to start fast. Yet he had other ideas, breaking immediately before racing way to win the second set 6-1 – the most lopsided set he had won against Djokovic for seven years.

He continued to press. But Djokovic, tennis’s greatest wall, stubbornly refused to budge. Time and again he was like the superhero Plastic Man, whose malleable body allows him to stretch to impossible lengths, getting balls back that Federer thought had been dispatched for a winner. Another tie-break came. Again Federer faltered. Somehow, incredibly, Djokovic was a set from victory.

Federer looked to be tiring. Yet again he picked himself up and, when Djokovic erred, he went for the jugular to go 5-2 up and win the set. As he hit the winning point the decibel levels inside Wimbledon went from 0-100 faster than any sports car.

Up until now it had not always been a match of the greatest quality. But the final set, which lasted two hours and two minutes, became intensely gripping and grippingly tense. Djokovic broke early and went 4-2 ahead, yet when Federer broke back suddenly 10,000 people were standing and punching the air as if they were at a religious revival. Briefly it seemed as if they were.

Of course the Centre Court crowd wanted Federer to win. Could one blame them? This could be the last chance they get to see him, a dominant presence at Wimbledon for 16 years, on the court he loves best. They were similarly supportive of Serena Williams on Saturday, knowing that genius – no matter how brightly it burns – eventually has to fade.

It looked as if they were going to have their wishes granted when Federer had his 21st grand slam title on his racket at 8-7 and 40-15 up in the final set. Yet Djokovic, just like when he saved two match points against Federer in the US Open in 2011, had other ideas. The first was saved with a thumping service return to the body. The second by a sublime passing shot as the Swiss player rushed into the net. It is possible to wound Djokovic. But putting him away is another thing altogether.

On the match went until it got to 12-12 and became the first singles match at Wimbledon to end on a tie-break. Once again Djokovic handled the pressure better.

Federer tried to shrug off the defeat, saying: “Every loss hurts at Wimbledon but I am very strong at being able to move on. I don’t want to be depressed about an amazing tennis match.” But rarely has he looked more deflated.

With this victory Djokovic extends his lead over Federer to 26-22. For good measure he has also now beaten him in three of their four matches on grass. And once again he did so almost alone, except for those inside his player’s box and a pocket of Serbian fans cheering him on. Not for the first time he proved impervious – and imperious.