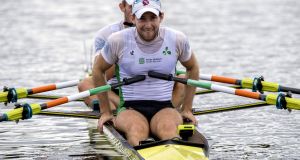 Ireland won two silver medals at the World Cup Regatta in Rotterdam on Sunday – the second after an extraordinary race by Paul O’Donovan and Fintan McCarthy.

The Ireland lightweight double led for three quarters of the race but were pipped by three hundredths of a second by fast-finishing Germany.

The Irish had stayed in front even after Paul O’Donovan had stopped rowing briefly in the second quarter as he reached down and flipped a stroke coach back into the boat. All without losing their lead!

“There was a bit of ruckus, I wasn’t sure had Fintan broken an oar, but I thought we’re going too fast for that. I thought ‘what the hell could this be’,” O’Donovan said.

He looked around and saw that Fintan’s ratemeter was no longer where it should be. The piece of equipment was dragging in the water.

“I grabbed at it and I didn’t care whether I threw it in the water or into the boat,” O’Donovan explained.

He had stopped sculling but they got going again.

“It was a bit of quick thinking,” O’Donovan said. “But I suppose [the stop] counted against us at the end.”

The openweight double of Philip Doyle and Ronan Byrne also showed a great turn of pace to take a silver medal.

In difficult conditions, with bobbly water, the Ireland double raced really well. Germany and Switzerland pushed into the early lead. Doyle and Byrne were the outstanding crew through the middle stages: they passed Germany and pushed up on Switzerland.

Remarkably, Ireland then pulled out a very fast last 500 metres – one minute 44.8 seconds and went close to beating the Swiss, overlapping them coming to the line.

Doyle said that the conditions at the start were “chronic” and they “snaked” around in the first 500 metres. They got hold of it from there. “We seemed to have found how to race, a little bit,” the Ulster man said.

At 1500 metres they took their first real look at the order and saw they were second. “Ronan said ‘go now!’ Near the finish I saw their [the Swiss] bowman and knew we were close, but they made another push. They’re a classy crew.”

The primary aim is to finish in the top 11 at the World Championships next month and qualify the boat for Tokyo 2020. “We are very aware it’s not job done. There’s a lot of work to be done in the next four weeks.”

The Ireland women’s pair of Aileen Crowley and Monika Dukarska finished sixth in their A Final.

The Irish crew started very well and swapped the lead with New Zealand early on. However, it was Grace Prendergast and Kerri Gowler who took it out in the middle stages. Australia moved up beside them and, after a fine contest, took gold. Crowley and Dukarska could not maintain the early speed.

Dukarska was not disheartened afterwards, saying the crew could improve. “We were happy with the performance. Especially as it was the first time we have raced together as a pair.”

“I came here to prove to myself and to the selectors that I still deserve a chance – that I can fight for a spot in the double sculls,”