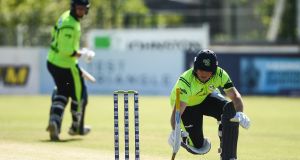 Zimbabwe finally picked up a win in the last game of their 11-match tour of Netherlands and Ireland at Bready, Co Tyrone. Their eight-wicket win squared the T20 series and gave some respite to the beleaguered sport in the African country.

Paul Stirling’s dismissal off the first ball of the game presented a problem to Ireland, who have relied on the Middlesex man’s runs all season. But a measured 47 by Gary Wilson, and some big hitting by the middle order – Mark Adair hitting four sixes in a 15-ball 38 – ensured Ireland posted 171-9.

Although the recalled George Dockrell ensured Hamilton Masakadza’s lamentable run continued, Zimbabwe were overdue a victory. Their most consistent batsmen ensured that happened, with Brendan Taylor the only other wicket to fall, to Shane Getkate for 39.

Ireland’s new look bowling attack – Josh Little and Dockrell came in for Tyrone Kane and Andrew Balbirnie – were taken apart without discrimination. Little and Craig Young bowled too short, and Gareth Delany was unlucky to get just one over, which yielded two singles before a last-ball six.

Craig Ervine (68no) and Seán Williams (58no) combined for an unbroken stand of 111 as Zimbabwe romped to victory with 20 balls to spare.

The early finish allowed the sides to watch the closing drama at Lord’s, with Balbirnie tweeting “Well done England. Now go and celebrate for 10 days ...”

Ireland’s next game is the Test against England at Lord’s, starting July 24th.