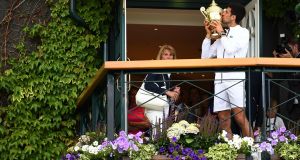 Novak Djokovic poses with the winner’s trophy on the balcony of the club house after beating Roger Federer to win Wimbledon. Photo: Daniel Leal-Olivas/Getty Images

Only the good vibe ripple effect from Lord’s that coincided with the final throes of the men’s final tempered a crowd that were steadfastly on the side of a 37-year-old Swiss player hoping to again leap into the history books.

In a match with a dozen twists and turns and which will go into the bundle labelled epic meetings, Federer, the enduring 37-year-old, held two match points when serving for the championship at 8-7 in the fifth set.

Normally plenty but Novak Djokovic, the top seed and defending champion, saved both and extended the match. He then broke Federer’s serve as the two faced each other over the net like middleweights who had punched themselves out before entering a tiebreak at 12-12, another first for the a final as it was introduced this year at Wimbledon.

This was also the longest Wimbledon men’s singles final, nine minutes longer than Federer’s loss to his other long time rival, Rafael Nadal, in 2008 with the first set on Sunday running to 58 minutes, longer than the entire women’s final on Saturday.

The depleting fifth set took 122 minutes before Djokovic hit a masterful backhand down the line for 6-3 in the tiebreak and three championship points. He needed just one, Federer mistiming a ball and his return arcing high and out of the court, Djokovic’s supporters for once loudest in the stadium.

King of the tiebreaks in the first, third and fifth sets, Djokovic won three of eight break points earned in the match, Federer seven from 13. In the end Federer won 14 points more than his opponent. No matter.

For the Serb it’s quite a career revival from his low point in the spring of 2018, when he was looking for consistency and motivation and struggling to find his form after elbow surgery.

He has now won four of the last five Grand Slam singles titles, bringing his career total to 16, just two behind Rafa Nadal’s 18 and four behind Federer’s record of 20.

“Yeah, I mean, one shot I guess,” said a disappointed Federer when asked where it went wrong. “So don’t know which one to pick. Your choice.

“I don’t know if losing 2-2-2 feels better than this one. At the end it actually doesn’t matter to some extent. You might feel more disappointed, sad, over-angry. I don’t know what I feel right now. I just feel like it’s such an incredible opportunity missed, I can’t believe it. It is what it is, you know.”

“I mean, really, look, I was still happy to be at 8-all, 9-all. I don’t remember what it was. You try to see the positives, you try to take it as a good thing, I guess, that you’re not down a break or that the match is not over yet.

“If I could have picked it before the match to be at 9-all in the fifth, that wouldn’t be a terrible thing. You just always try to push yourself to see things on the better side. But, yeah, it was definitely tough to have those chances.”

Djokovic seemed always to be ahead as he raced to the front in the tiebreak when the two leveled at 6-6 in the first set. The 32-year-old took a 5-3 lead and at 6-5 clinched the set on Federer’s serve after a wide backhand from his 37-year-old opponent.

An oddly one-sided second set with three service breaks brought the pair level, Federer happily accepting a Djokovic double fault for 6-1. There was little separation throughout, just one break point earned but not taken by Federer in the third set and Djokovic again winning it on a tiebreak after racing to a 5-1 lead.

Two more service breaks in the fourth set allowed Federer take a 5-2 lead. Then, after two hours and 48 minutes of play Djokovic earned his first break point on the Federer serve. He took that for 5-3 but Federer had the set 6-4.

What seemed the pivotal service break in the fifth set was earned by Federer for 8-7 after a flashed cross court pass earned him Djokovic’s service game and the love of the crowd back on their feet for the umpteenth time.

Federer’s 22nd ace gave him 30-15 and his 23rd ace 40-15 and two championship points. That was his summit as he nervously netted a forehand and was passed at the net for deuce.

Another forehand into the net in his most unsteady game handed Djokovic the service break he sought, the match running to 12-12 and a first fifth set tiebreak in a Wimbledon final.

“It was probably the most demanding, mentally most demanding, match I was ever part of,” said Djokovic. “I had the most physically demanding match against Nadal in the finals of Australia that went almost six hours. But mentally this was different level, because of everything.

“I thought most of the match I was on the back foot actually,” added Djokovic. “I was defending. He was dictating the play. I just tried to fight and find a way when it mattered the most, which is what happened.”

That will be cold comfort for Federer as the three untouchable players – himself, Nadal and Djokovic – sweep into the hard court season and the US Open in September.

“I always try to imagine myself as a winner,” said Djokovic. “I think there is a power to that.”

There was and he used it.