Wimbledon final leaves Federer ruing what could have been 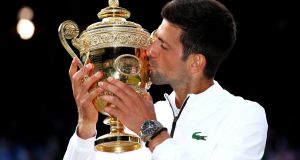 Two match points in the fifth set that Roger Federer will never get back may well haunt him for some years. As the longest final match in Wimbledon history unfolded to four hours, 57 minutes, the great Federer blinked when he had two championship points in his hands. Novak Djokovic accepting the gift to extend the final and win his fifth title 7-6(5), 6-1, 7-6(4), 4-6, 13-12(3).

“I will try to forget,” said Federer on court after the match. “It was a great match. It was long. It had everything. I had my chance so did he. Novak it’s great. Congrats man that was crazy. Well done.”

“I hope I give other people a chance to believe. At 37 it’s not over. It’s all good. I couldn’t give more. I gave it all I have and I still stand. Back to dad and husband, he added.

Djokovic equals the king of cool, Bjorn Borg, with five Wimbledon titles. He has now beaten Federer in all three Wimbledon finals they have played. It was also the first final decided on the fifth-set tiebreak as Wimbledon clamped down on all-night fifth-set affairs.

“I think this was one of the most exciting finals against one of the greatest players of all time, Roger,” said Djokovic. “As Roger said we both had our chances. It’s quite unreal to be two match points down and come back. Roger says he wants to give people a chance to believe they can still do it at 37. I’m one of them.

“When I was a boy dreaming to become a tennis player one day, this has always been the tournament for me to win. I used to make the trophies out of material in my room,” he added.

It was a partisan crowd, Djokovic respected but Federer loved. They understood history was in every ball smashed and in every way the match tilted, first towards Djokovic and then in an absurdly brief second set which Federer won, then back to Djokovic before swinging again and again.

Despite Federer’s age there was the possibility of his ninth Wimbledon title which would have taken him level with Martina Navratilova, who was also 39 when she won her last trophy in 1990.

The Centre Court crowd applauded every point and rally won by Federer, his break back of serve in the fifth set bringing the entire stadium to its feet. Djokovic missed an open court with his forehand shot on the next game, the ball clipping the tape and bouncing out of play – drawing another exploding wave of shrieks.

Sometimes his support was so overwhelming it seemed like an anthem over almost five hours, drowning out the aircraft on their flight path to Heathrow and at once spurring Federer on.

There were odd guttural howls of encouragement in Serbian between points but largely the younger 32-year-old was on his own and believing that if he could beat Federer in the 2014 and 2015 finals he could do it again.

It was Djokovic who won the first set on a tiebreak before Federer counterpunched with a 6-1 second set. The third went to a tiebreak, again falling to Djokovic before two service breaks to Federer to one from Djokovic in the fourth propelled the match into the evening fifth set.

It was Federer’s misfortune in the fifth that his serving game was always to catch up with Djokovic and as it crept forwards to Djokovic leading 6-5, Federer began a cycle of trying to break the serve of his opponent and then having to hold serve for the championship. Then he did break serve. Then he did serve for the match. Then he did hold two match points, hit a forehand wide and was passed at the net.

A championship lost is unkind to Djokovic. But a final untaken by Federer.