The 15-man squad included five players born outside the UK, including Irish-born captain

England cricket captain Eoin Morgan, born in Ireland, highlights the diversity of his side - which contained players born in New Zealand, South Africa and Barbados, as well as the grandchildren on Pakistani immigrants - following their World Cup win. 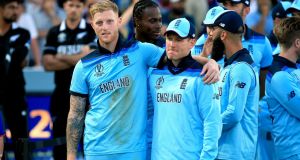 England’s Ben Stokes is from New Zealand and their captain Eoin Morgan is Irish. Photograph: PA

Jacob Rees-Mogg has been criticised for politicising England’s victory in the Cricket World Cup after writing on social media that “we clearly don’t need Europe to win”, a comment that has attracted derision from thousands of cricketing fans eager to educate the Brexiter about the team’s international make-up.

The Conservative MP celebrated England’s dramatic victory over New Zealand in the final on Sunday by tweeting: “A d..n close run thing, we clearly don’t need Europe to win… #CricketWorldCupFinal.”

Among those who reacted to Rees-Mogg’s tweet, which received more than 3,000 comments in under an hour, was Neale Richmond, an Irish senator and the Fine Gael spokesman for European affairs, who responded: “Your captain is Irish…”

The 15-man squad includes five players born outside the UK, including the Irish-born captain, Eoin Morgan. Tom Curran and Jason Roy are originally from South Africa, while Ben Stokes and Jofra Archer were born in New Zealand and Barbados respectively. In addition, Moeen Ali and Adil Rashid are the grandchildren of Pakistani immigrants and both belong to the Mirpuri community.

While the team represents England and Wales, under English and Wales Cricket Board (ECB) regulations a player must be a British citizen, have been born in England or Wales, or have lived in either country for three years to qualify.

The ECB changed their regulations last year, reducing the eligibility criteria from seven years in a move that was widely seen as allowing Archer, 24, the chance to play. Archer bowled the dramatic, victorious super over.

Rees-Mogg’s fellow Conservative MP Ed Vaizey said that his colleague was guilty of “slightly misjudging the mood”, before adding that “while you’re on, the English captain is Irish”. Alastair Campbell suggested that “perhaps instead of making a silly Brextremist point, offer congratulations to the Irish captain, the NZ-born man of the match, and the Barbadian bowler who got it over the line”.

3 The Offload: Ireland women must be allowed to move with the times