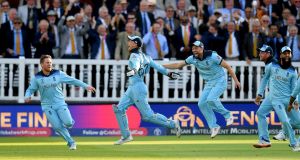 This was the most astonishing, fortuitous, preposterous climax to any cricket match I’ve witnessed, let alone a World Cup final. Only the Kiwis could have coped so graciously with the manner of their defeat in the most riveting final this tournament has ever witnessed. At the end of it England emerged as World Cup winners for the first time. It is hard to believe how they managed it. We had better start at the end.

The game had been gripping throughout. But in the final over it had more twists and turns than a Hitchcock thriller. England needed 15 runs to win from the last over, which was bowled by Trent Boult. Ben Stokes was on strike with two wickets remaining.

The first two deliveries produced nothing. Stokes hit the fielders and declined to run; the crowd, at least the majority of them, groaned. Stokes hit the next ball over mid-wicket for six. Nine runs were now needed from three balls.

Now comes the twist that the few scriptwriters would have conceived. Stokes heaved again and the ball sped to mid-wicket. Martin Guptill swooped and sent the ball back to the keeper’s end to which Stokes was sprinting to complete a second run. He dived desperately for safety; the ball struck his bat and was consequently redirected towards the pavilion. There was a frantic pursuit but no Kiwi could stop it.

In these circumstances the etiquette is that the batsmen should not run, which was observed by the two England players. But once the ball had crossed the boundary the umpires had no alternative but to signal that six runs had been scored. Two had been run plus the four overthrows. Three runs were now needed off two balls. Stokes hit to long on and Adil Rashid was run-out at the bowler’s end seeking a second. No matter. Two needed from one ball. This time Stokes intentionally patted to long-on calculating that they could scramble two runs. A perfect throw came from Jimmy Neesham and Mark Wood was nowhere to be seen.

And so the match was tied and we moved to the Super Over, cricket’s equivalent to the penalty shootout. Out came Stokes again along with Jos Buttler. Once again Boult had the ball. England mustered 15 runs. So now New Zealand, on the brink of victory 20 minutes earlier, needed 16 to win the World Cup. Out came Neesham and Guptill. Jofra Archer was given the dubious honour of bowling, quite a compliment for the novice. A wide was followed by a mighty six from Neesham over mid-wicket; then a misfield and we were back in familiar territory. Three runs needed off two balls, then two from the last one. By now it was established that if the match was tied England would win on the relatively random basis that they had hit more boundaries in the match. Guptill hit to mid-wicket. Jason Roy’s throw was far from perfect but Buttler gathered it and dived for the stumps with Guptill a yard adrift. Somehow England could celebrate victory, yet no sane cricket fan in the ground could conclude that New Zealand deserved to lose. After this surreal hour they emerged with as much credit as England, maybe more, since the cricketing deities had been so cruel.

Throughout the day the New Zealand side had been at their most resilient in what seemed destined to be a slow burning classic that must have enthralled an enlarged audience, whatever their age or gender. They have become the experts at defending small totals, which are supposed to be chicken feed in the modern era. Here they had to defend 241.

They managed to reduce England to 86 for four in the 22nd. Then it became trickier for the Kiwis. Ben Stokes dug in Dhoni style alongside Buttler. They repaired the damage with Buttler speeding along at a run a ball, which was faster than anyone else on the day. Stokes, by contrast, gritted his teeth and battled. For a while it looked as if this pair might guide England to a conventional victory as they added 110 runs together, but the New Zealanders grabbed every chance that came their way and refused to budge an inch. By the start of the final over of the game they were favourites to win the match.

Naturally they would have preferred a bigger total to defend but earlier in the day England had been coldly clinical in the field with Chris Woakes and Archer on target from the start, exploiting a surprisingly green surface.

Guptill has been in a drought but he delivered a couple of eye catching boundaries. An upper cut over third man off Archer cleared the boundary, the solitary six of the innings. This was followed by a crunching straight drive over the bowler’s head but this would not be Guptill’s day. He would soon be lbw to Woakes. Meanwhile Kane Williamson was batting as if a crisis, while not present, was just around the corner. After 22 deliveries he had just two runs.

However the storm was weathered by Nicholls and Williamson. The pressure eased; the slips dispersed; Adil Rashid was then summoned up as the Kiwis dutifully went about their business passing three figures in the 22nd over.

Eventually Plunkett found the edge of Williamson’s bat and Nicholls was bowled via an inside edge for a plucky 55.

Now the boundaries were few and far between, though none foresaw that this would be a decisive factor. Ross Taylor was given lbw to Mark Wood and at the end of their innings New Zealand could not break free despite a few crisp strokes from Tom Latham.

Yet 242 soon seemed a long way off. Boult’s first delivery to Roy was just about perfect and it prompted a huge appeal for lbw, which was declined by Umpire Erasmus. A review was sought. The ball pitched in line but was deemed to be hitting the outside of the leg-stump so Roy survived by virtue of an umpire’s call.

At the other end Matt Henry kept beating the bat and then Roy would unfurl a majestic drive. But on 17 Roy was beaten again but this time the ball had brushed his bat.

Out came Joe Root, usually the most reassuring of sights, but not today. For Root, of all people, lost control. He heaved against Colin de Grandhomme and missed. The next ball was wider and Root tried to hit it hard, always a bad sign. A drive became a swish and he was caught behind. This stunned the audience; it was like a great actor fluffing his lines on the grandest stage.

Soon Bairstow was bowled off the inside edge by Lockie Ferguson, who soon produced something more sensational. Morgan thrashed outside the off-stump; the ball flew towards deep point, where Ferguson sprinted in before diving forward to hold a brilliant catch. It felt like a match-winning moment. Yet this was just the start of a bewildering, helter-skelter finale. What a day. What a ricochet. – Guardian