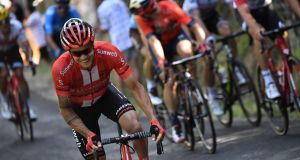 Nicolas Roche made a big bid for a stage win at the Tour de France on Sunday, infiltrating the day’s big breakaway move, riding aggressively in the finale and ultimately finishing sixth at the finish in Brioude. He crossed the line 14 seconds behind the day’s winner Daryl Impey (Mitchelton-Scott) and Tiesj Benoot (Lotto Soudal), having been clear with those two riders in the finale before drifting back.

“My plan was to give everything on that last climb and see how I was going afterwards,” he said. “I knew that if the bigger horsepower guys were with me by the top then I would have lost anyway. The problem was when we went through that town they tried to put a bit of pressure on and when Benoot went I didn’t have the explosiveness in my legs to close the gap.

“I stayed a few seconds behind, trying to fight back on but then I realised the group behind was coming fast. I waited for them and tried to recover but I had nothing left for the sprint in the end.”

Roche’s first cousin Dan Martin finished alongside the other overall contenders. They finished 16 minutes 25 seconds behind Impey, having allowed the break to gain considerable time after it was realised there was no general classification contenders in the move.

Roche’s move started approximately 15 kilometres into the stage, when the Team Sunweb rider clipped away with 13 others. They were joined by another rider and together they eked out a maximum lead of over ten minutes. The Irishman was one of the strongest and heading into the final 15 kilometres, he went clear with Benoot. Impey got across to them and then when Benoot put in a surge with just over eight kilometres to go, Roche was gapped. He was caught by several chasers behind and crossed the line sixth.

His team is targeting stage victories in the Tour and Roche is aiming for his first-ever win of that type at the Tour. “I had my shot today and unfortunately I didn’t get the top result I wanted, but sixth place isn’t too bad.” He is certain to try again later in the race.