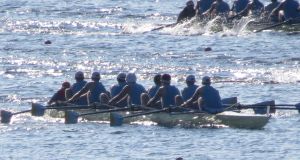 UCD on their way to winning the senior eights Championships of Ireland. Pic: Liam Gorman

The men’s and women’s senior eights at the Irish Championships produced surprise results – paticularly in the manner of the wins.

UCD, who have duelled with Commercial all year, dominated the men’s race, and the NUIG/Castleconnell women’s eight were also strong winners.

“That was better than winning the Under-23 Worlds,” said UCD strokeman David O’Malley. He partnered Shane Mulvaney in the winning lightweight pair at that grade in 2018.

The win was particularly sweet, as UCD had targeted it at the start of the season – and defending champions Commercial had beaten them at every turn. “They smashed us all year,” said O’Malley. This time out Commercial, who had done well at Henley, did not contend.

It was the first senior eights win for experienced coach Martin Feeley.

UCC/Skibbeereen were good tips in the women’s eights. But NUIG, coached by Ciro Prisco, had a tremendous regatta, and this topped it off. Sadhbh O’Connor and Fiona Murtagh were winning their fourth Championship event of the weekend.

Prisco made a point of thanking Castleconnell coach James Mangan.

The Sunday had started off with a string of wins for Cork clubs and the last two races of the day went to Lee in the women’s junior quadruples, while Skibbereen took their third title, the men’s intermediate double.

The closest race came in the club coxed four final. There was less than a third of a second between winners St Michael’s and NUIG.