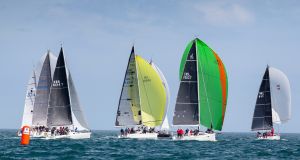 The coastal fleet getting racing under way on the opening day of the Volvo Dún Laoghaire Regatta. Photograph: David Branigan/Oceansport

Light airs led to a problematic start to the Volvo Dún Laoghaire Regatta in Dublin Bay on Thursday, but Ireland’s biggest sailing regatta is under way and there are already some surprises on the scoresheets.

When the starting guns sounded off the town’s harbour on Thursday afternoon, it confirmed the regatta had surpassed 2017’s fleet of 470, with 498 boats on Dublin Bay. It also came close to breaking 2007’s record of 528.

What is even more satisfying for the Dún Laoghaire organisers this week is that nearly half the entries are visitors, an indication of the future international prospects for the regatta across the Irish Sea and beyond.

The opening races were not without problems for the 2,500 competitors. Racing was abandoned on one of the six courses when winds died.

Racing restarted but only after an exasperated Irish Sailing president Jack Roy, who is the race officer on the south course, told competitors over VHF Radio: “It’s meant to be a fun regatta, but that wasn’t much fun.”

He was remarking on how a steady gradient wind from 270-300 degrees had disappeared just after the start leaving the big IRC fleets of Zero, One and Two drifting on the first leg of the course.

In the end only one of two scheduled races were sailed on the south course in a new wind from 110 degrees, and it led to some early upsets, but there were no surprises in the ultra-competitive class one where it was business as usual for John Maybury’s J109 Joker II.

Maybury, of the Royal Irish Yacht Club, was the runaway winner of the 2017 regatta, and more recently he won last month’s ICRA National Championships for a record fourth time. He stayed on course to retain his Volvo title on Thursday in tricky conditions when he was the winner of the opening race in the 26-boat Class.

In the one-design fleets, 1988 British Olympic gold medallist Mike McIntyre has an early lead in the RS Elite UK championships that are being sailed in Dublin for the first time.

Racing continues in an ambitious programme of 290 races across 34 classes by Sunday lunchtime.

Ireland is among 22 entries for the 2022 edition of the Golden Globe Race which will be hosted again by the Vendée city of Les Sables d’Olonne, France. Pat Lawless of Ballyferriter, Co Kerry, aims to finish what Conor McGuckin started in the 50th anniversary of the Golden Globe Race and become the first Irishman to do a non-stop, unassisted solo circumnavigation of the world.

Entries have been received from Austria (1), Australia (5), Canada (1), France (2), Ireland (1), Italy (1), New Zealand (1), Norway (1), UK (7) and USA (2), four of which remain confidential. McGuckin’s boat meanwhile, is still emitting its tracking signal and remains abandoned off the west coast of Australia since the Dubliner’s rescue last September.

After experiencing every sort of condition from gales to near calms, the 1926-built restored ketch Ilen of Limerick reached her first port in Greenland on Thursday to conclude 11 days of transatlantic ocean voyaging. The 56-ft ketch undertook the voyage as part of the International Year of the Salmon to raise awareness of what humans can do to ensure salmon and their habitats are conserved.

1 Gordon D'Arcy: I know what Joe and Cheika would do. Fix the basics
2 Darragh Ó Sé: Cork and Donegal went out with the wrong attitude
3 Can Solskjaer’s Man United find their groove when it matters?
4 Ryan happy to get back to leading by example when Sexton returns
5 Simon Easterby admits Ireland may need to take new line on maul
Real news has value SUBSCRIBE