Veteran has fought her way into last four with single goal in mind: equalling Court 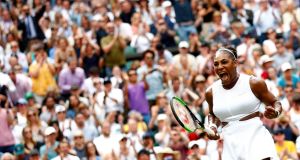 The motivation for Serena Williams in today’s Wimbledon semi-final is less about her undying love of the game, more the 37-year-old chasing numbers. Margaret Court set the record at 24. Grand Slam wins is the only number in her head.

For Williams to hit through 54th-ranked Barbora Strycova to a final and claim another Slam title, her first since winning the Australian Open while pregnant in 2017, might go down as her best ever. Not because of equalling Court but the fight to be involved.

Williams’s year has been one of misery and pain since she was beaten in the quarter-finals of the Australian Open in January by Karolina Pliskova. She didn’t play again until March at Indian Wells, where she retired from her match against Garbine Muguruza.

She then played in Florida, Rome and Paris, where she was beaten in the round of 32 at Roland Garros. She skipped the grass court season, turning up at Wimbledon wondering how her ragged knee was going to behave.

Since January the ranking has crept down from 10 to 11, back to 10, down to 11 and then down to 16, where she was at the beginning of July. That’s coming off a career where five times she finished the year as the world number one.

In Williams’s quarter-final against Alison Riske it wasn’t her knee but her ankle that was causing trouble. The physiotherapist was asked to come to court with her strongest tape.

It did not seem to be affecting her too much yesterday during her defeat alongside Andy Murray in mixed doubles. No more distractions.

Strycova, her opponent today, was asked after beating Johanna Konta: why here? Why now? The question contained a level of confusion and surprise that a 33-year-old ranked 50th in the world would make it so far after a career of never having done so.

“What a question,” said the Czech replying to the insensitivity. “Maybe as older I get, I enjoy it more. I can’t answer. I don’t know why.” Strycova, never ranked higher than 16, added that she has played on Centre Court twice.

It is Williams 37th Grand Slam semi-final, the same as Steffi Graff and her 12th Wimbledon semi-final. But it was Martina Navratilova who said that when she was getting older she began feeling more pressure. The longer she played it somehow became more difficult, not easier.

“I agree,” said Williams before disagreeing. “I definitely feel a lot more pressure as I got older. Now that I am past older, I feel a little bit less pressure [smiling]. I definitely felt pressure, like not so much when I was younger, and then older. Now it’s like I’ve done everything I need to do. Like, I’ve had a great career, so I don’t feel the pressure as much anymore.”

This is her longest drought since 2002 and while it is clear to see the demands she places on herself and the enormous lift in her game at the pressure points, she knows no former Wimbledon finalists, reigning major champions or current top five players remain in her path.

Simona Halep, who faces Elina Svitolina in the other semi-final, won at Roland Garros last year but her crown now belongs to Australian world number one Ashleigh Barty.

Williams is also a half-step slower except for those moments of hyper aggression. So far she has not shown she can sustain it for a whole match, whicha counter puncher such as Halep, if they both make the final, could exploit.

In singles Strycova is 0-3 against Williams, and she lost all of those matches in straight sets. The difference in physical dimensions and power output are also considerable with Williams’s serve still a lethal piece of kit. She has a tournament-leading 41 aces, 19 of which came against Riske.

“I believe in myself,” said Williams. “I believe if I’m feeling well, I can be a big competitor in a sport that I love, and I’ve done so well at,” she added.

“I just keep fighting. I don’t know what I tell myself. I guess I’m in the moment. I don’t even know if I tell myself anything in particular.”