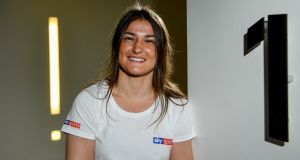 Katie Taylor said her fight with Delfine Persoon was one of the toughest of her career. Photograph: Sam Barnes/Sportsfile

Katie Taylor was just 19 when she won the first of her Sportswoman of the Year monthly awards, so the fact that she celebrated her 33rd birthday on Tuesday of this week was a fair old reminder of just how long she has been excelling in her chosen field.

And here she is 14 years later collecting her 12th monthly prize, making her a contender, yet again, for our overall award – and should she be successful, it would be the fifth Sportswoman of the Year award of her career. No one else has even come close.

Just two other names on that 2005 roll of honour are still active at the peak of their sports; Briege Corkery, the only other woman to win the overall award more than once (in 2005 and jointly with Rena Buckley a decade later) and who is seeking a record 19th All Ireland medal with Cork this year; and Republic of Ireland international Niamh Fahey, now playing her club football with Liverpool.

Staying at the top of your game for that length of time is some feat, but while Taylor’s list of honours is a spectacularly long one, she described her unifying of the professional lightweight division with that victory over Delfine Persoon in Madison Square Garden as her finest hour, even putting it ahead of her Olympic gold in London 2012.

And it was, she said, the toughest fight of her career, one Persoon, of course, believed she had won – and she wasn’t without her supporters on that front – which makes the prospect of a rematch, if it were to happen, a riveting one.

But not even the controversy surrounding the fight could dampen Taylor’s joy at making history, having done so just three years after her shattering experience in Rio.

Such is the nature of the game, Taylor was hardly out of that Madison Square Garden ring when she was being asked what was next in her schedule, with everything from a Persoon rematch, which the Bray fighter described as “inevitable”, to a meeting with Amanda Serrano, to a move up in the weight classes to take on the likes of Jessica McCaskill or Cecilia Braekhaus being mentioned.

The one option Taylor doesn’t appear to be considering is retirement, despite possessing all those belts, her appetite to carry on winning undiminished. And as she said earlier this week, “the way woman’s boxing has come on over the last few years has been absolutely phenomenal”, so she doesn’t want to walk away at a point when it is in such rude health. And no one, of course, has done more to take it where it is now than Taylor.

December: Mona McSharry (Swimming). The Sligo swimmer ended her 2018 in some style at the Irish Short-Course Championships in Lisburn, collecting six titles in the space of just three days as well as breaking six national records. The highlight for McSharry was the breaking of Michelle Smith’s 23-year-old 100m freestyle record. And she’s carried on breaking records since, the latest the Irish 50m fly mark which she broke at May’s Glasgow International Swim Meet.

January: Phil Healy (Athletics). The 24-year-old Cork woman took our January award for the second year running after an impressive start to the season, once again winning the 400m at the Vienna International Indoor Meet, ahead of European and World medallists Lisanne de Witte and Eilidh Doyle, maintaining that form at the Millrose Games in New York where she finished a close second to the USA’s Jaide Stepter.

February: Ciara Mageean (Athletics). Another runner to have a sparkling start to 2019, Mageean opening the year by setting a new Irish indoor mile record in Boston, taking two seconds off her Irish Indoor 1,500m record before winning bronze in the 1500m at the European Indoor Championships in Glasgow.

March: Rachael Blackmore (Horse racing). The Tipperary woman pushed Paul Townend all the way in the race to become Irish champion jockey, having the season of her life, finishing up on 91 winners. There were few better days, though, than when she picked up two Cheltenham successes, including the first Grade One victory of her career.

April: Leona Maguire (Golf). After seven tournaments, all of her top 10 rivals having played one to three more, Maguire tops the rankings on the Symetra Tour, putting her on track for qualification for next season’s LPGA Tour. The highlight of her year so far was her victory at the Windsor Golf Classic in California, her first ever professional triumph.

May: Jenny Egan (Canoeing). Having enjoyed an outstanding 2018, the 32-year-old member of the Salmon Leap club in Leixlip carried her form into 2019, most notably in Poznan and Duisburg where, in the space of a week, she won two World Cup medals, missing out on gold in Poland by less than a second before taking bronze in Germany in another tight finish.