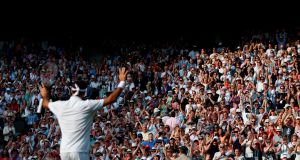 A Rafa and Roger semi-final was expected, predicted, delivered. The suspense of this year’s Wimbledon has not been the plot or the direction of the narrative but a slow burn towards the resolution. It seemed that way since the first week and now after opportunity for a changing of the guard flat lined early in the tournament, it is has come down to which of the three. Perhaps.

With Federer taking four sets against Kei Nishikori and Rafa Nadal and Novak Djokovic taking three sets, Djokovic against the scuttling David Goffin and Nadal against a polar opposite, Sam Querry, a Californian oak cashing down balls, the seeded players settled comfortably for the night.

None of the differing suites of skills could unman the three former champions with Roberto Bautista Agut an outlier among the champions, beating Guido Pella 7-5, 6-4, 3-6, 6-3 and earning an opportunity to face the top seed Djokovic for a place in the final.

Arriving as a free spirit because of the lack of expectation, Bautista Agut is on new ground having never reached the semifinal of a Grand Slam before. With Nadal he forms a mini Spanish armada as the first time two Spanish players have reached the semi-finals stage at Wimbledon.

There was a slow start, or at least a feeling on Federer’s part against Nishikora as he dropped the first set 6-4. The 29-year-old Japanese player had decent history with the player who now has a record 100 singles’ wins at Wimbledon, the first in history to do so at a Grand Slam event and the first to reach a 13th semi-final. Nishikori had won three of their 10 previous matches, most recently at the ATP finals in 2018.

The seventh seed came out firing from the first point, going up 2-0 and earning three break points to take a 3-0, double-break lead before the Swiss was able to hold and get on the board. But that set was done.

Federer seamlessly pressed with a break to love in his first return game of the second set, a massive forehand winner drawing a shriek. The momentum of that drove him through the set, where he made just one unforced error.

At 3-3 in the third Federer broke service again, another forehand winner hitting the baseline and in the fourth set he broke at 4-4 both enough to control the match 4-6, 6-1, 6-4, 6-4. A small turning of the screw was plenty. The challenge of playing against Federer, Roger was asked.

“The problem is I can’t think that way too often because then I start playing like I would be playing myself,” he said. “And that doesn’t make any sense sometimes because they have total different strengths and weaknesses than I do.

“I didn’t think of it while I was playing today,” he added about the record 100 matches. “Actually not at all, not once. Then as I’m signing (autographs), the guy says, Congratulations for your 100. Oh, yeah, I didn’t know. I forgot.”

Djokovic was in the same mood he has been in for most of the nine days, his game now humming with bullet proof efficiency. While Goffin looked like an unkempt teenager shaken out of his digs and dragged to Centre Court, the 28-year-old Belgian, who had beaten the number one seed just once in six previous meetings, played with willingness and athleticism. But just for one set.

After Djokovic had blunted his edge, Goffin quickly realised there were no cracks and everything was coming back at him. He wilted in just under two hours, Djokovic reaching his ninth Wimbledon semi-final and 36th Grand Slam semi-final.

Gofffin put early pressure on the Djokovic serve and drew him into extended rallies. Trailing 4-3 in the first set, the four-time champion then won 10 straight games beating Goffin 6-4, 6-0, 6-2.

“Whoever I get to play in the semis, they’re not ranked in top 10, 15 in the world but I have tonnes of respect for them,” said the sage and top seed. “I played as well as I have in the entire tournament.”

That semi-final opponent is Bautista Agut, who beat Guido Pella 7-5, 6-4, 3-6, 6-3 in just over three hours, more than a hour more that it took the Serb to push by Goffin.

And Nadal. The bomb disposal expert took all the venom out of Querry and his serve in the first set and then rifled through the match 7-5, 6-2, 6-2 in a few minutes beyond two hours. It has earned him a shot at Federer on Centre Court for the first time in 11 years.

“Always I say the same,” said Nadal. “Of course, the opportunities to play against each other every time are less. But we still here. I just expect to play against probably the best player of the history in this surface.”