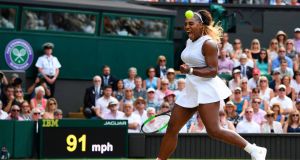 A match away from title number eight and if Serena Williams showed a hint of slowing down it wasn’t on show as she broke into a canter against unseeded Ukrainian Barbora Strycova.

Taking one minute under the hour to wrestle Strycova to the ground and choke her out, Williams has come within a match of equaling the record of Margaret Court’s 24 Grand Slam singles’ wins and becomes the oldest Grand Slam finalist in Open Era history.

If the ageing rockers in the men’s draw, have been turning heads, Williams is doing it all on her own, taking ownership of this semifinal long before the 27 minutes it took her to clean out the first set 6-1 and the second 6-2.

At 37 years 291 days, she officially takes over from Martina Navratilova as the oldest swinger 15 years after Navratilova contested the 1994 final at 37 years 258 days, losing to Spain’s Conchita Martinez.

In her 11th Wimbledon final, Williams meets former world number one Simona Halep, whose passage was similarly sweet. Beating eighth seed Elina Svitolina 6-1, 6-3 the French Open champion in 2018 was delayed for just 73 minutes. It is Halep’s first final on a surface she once held in contempt.

Having returned to competition 16 months ago following the September 2017 birth of her daughter, Williams has been chasing just one number and that’s 24 although her mindset for the final was less inclined to invite that kind of pressure into plans.

“I thought about it this morning,” said Williams. “I actually didn’t think about it since because it’s really not about 24 or 23 or 25. It’s really just about going out there and giving my best effort no matter what.

“No matter what I do, I will always have a great career. I don’t know. Like, I just kind of let it go this morning. Yeah, I feel really calm about it.”

Williams crushed an opponent who on Tuesday had embarrassed Britain’s Johanna Konta by coming from 1-4 down to execute the cleverest of comebacks. But steely Williams is not Konta, the American finding herself at 5-1 and serving out the set.

Ruthless, the 23 times major winner flared up and gorged on points but she had to save three break points, before finally clinching the set with an ace.

Williams won 89 per cent of her first serves, the second set a glide through with Strychova facing a bewildering number of balls zooming by. In all Williams hit 28 winners to the Czech player’s eight, the second set falling in 32 minutes.

“I think it was her best match of all here,” said 33-year-old Strycova. “She was serving amazing. She was playing very deep, so I really couldn’t play what I wanted to do.”

Halep’s match showed early signs of being the anticipated baseline boomfest and with 17 minutes gone had progressed at glacial speed to a fifth deuce in the second game with ever longer rallies. Halep’s first serve had gone missing and she double faulted at pressure points. It could have been costly but she weathered the early splutter before racing off to 5-1 and set one.

Svitolina stayed with Halep to 3-3 in the second set, but she hadn’t won a point on the Romanian’s serve. Cheered on by her partner, French player Gael Monfils, the Ukrainian appeared to tire, Halep’s service break for 3-4 injecting an air of inevitability.

Like the first set, Halep struggled to close but needed just two chances rather than the six needed before, a forehand return too good and too much. A place in the final was hers. Smart pro she is Halep would say nothing about what she would do or how she was going to play against the American hoping to take another a leap into history.

And she was true to her word.