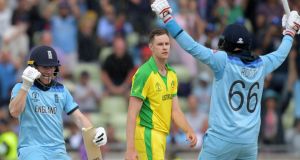 Skerries’ Eoin Morgan and his teammate Joe Root celebrate their victory against Australia at Edgbaston in Birmingham. Photograph: Getty Images

England’s passage to the World Cup final was faintly ridiculous. Semi-finals are supposed to be gritty affairs with runs dourly chiselled out in a desperate quest to get to Lord’s. In semi-finals you are supposed to win ugly. New Zealand showed the way at Old Trafford.

Yet Eoin Morgan’s England took the alternative route to a final. They smashed Australia by eight wickets, chasing down a target of 224 with 17.5 overs to spare. When England were batting this game had the air of an exhibition match. Batsmen kept heaving deliveries from the mighty Mitchell Starc over the infield. Spinners were butchered into the stands. “We’ll get ’em in sixes” appeared to be the plan.

England concluded after their defeat against Sri Lanka at Headingley they had been too passive at the top of the order when pursuing a modest total. This was not a charge that could be laid at their door at Edgbaston. They were minded not just to defeat the Australians but to humiliate them.

Jason Roy sparkled once again, cracking a carefree 85 from 65 deliveries but it was the excellence of the bowlers earlier in the day that forged a victory that was surreal in its simplicity. Chris Woakes, who finished with three for 20 from eight overs, was justifiably the recipient of the man of the match award.

Woakes’s first delivery, the first of the match after Aaron Finch had won the toss, was deceptive; a gentle half-volley was crunched through the covers for four by David Warner. This was the zenith of the Australian innings.

Jofra Archer’s first delivery was also Finch’s first – and last. It was fast and straight and thudded into the left pad of the Australian captain. Kumar Dharmasena paused and then raised his finger; Finch paused and sought a review, which was a futile exercise. In the next over Warner lofted a drive back over the head of the bowler. Maybe this prompted Woakes to extra effort. The next delivery bounced steeply; Warner hung out his bat and edged a catch above the head of Jonny Bairstow at slip.

Out came Peter Handscomb, just drafted from the Australia A squad, which has been tiptoeing anonymously around the English countryside. There was no hiding place here. He was close to being lbw to his first delivery, after which he loitered uncertainly before being bowled off the inside edge by Woakes. Australia were 14 for three and rocking.

They rallied though it was a painful process, especially for Alex Carey, who had been promoted to No 5. Archer delivered a surprise bouncer, which clipped the bottom of Carey’s helmet, sending it off the batsman’s head and causing the fastener to penetrate his jaw. There was a long delay as the medics checked that Carey was not concussed before bandaging him up.

Carey, once an Australian rules footballer, had no thoughts of withdrawing to the pavilion and he was soon battling away alongside Steve Smith, who was hellbent upon survival. Together they added 103 with increasing fluency. The threat of Woakes and Archer could not be matched by the other pacemen. Initially Adil Rashid was unable to trouble them much either. Then he intervened decisively.

Carey attempted to clear the boundary on the leg-side, a very dangerous policy, even in the 21st century, when hitting into the wind. The ball sailed safely into the hands of the substitute fielder, James Vince, at deep mid-wicket, a simple catch but a good one in the circumstances.

Now Rashid’s confidence soared. In the same over he propelled his googly though Marcus Stoinis was unaware of this and was lbw. As ever Glenn Maxwell flickered; he hit Rashid for six over long-on and pulled him for four but before long Archer duped him. He tested Maxwell with a couple of bouncers, moderate ones that had too much elevation. Then Archer propelled his knuckle ball at a mere 80mph. Maxwell played too early and the ball plopped into the hands of Morgan at extra cover.

Another googly from Rashid deceived Pat Cummins and then Jos Buttler, alert and athletic, contrived to run out Smith with a direct hit that travelled between the batsman’s legs before hitting the stumps. This was not going to be Australia’s day.

England’s chase began conventionally enough. They had 50 after 10 overs and for a while Roy eyed up Starc and Cummins as if he was auditioning for a Test role. Then there was merry mayhem. Roy cracked Nathan Lyon’s first ball over long on for six. With his ship listing badly Finch tossed the ball to Smith, whereupon Roy hit him down the ground for three consecutive sixes. By now Roy and Bairstow had posted their fourth consecutive hundred partnership.

Then Bairstow was lbw to Starc, a decision foolishly reviewed. Out came Joe Root, who hit his first three balls for four. The man on the sound system decided this was the time for Sweet Caroline and Hi Ho Silver Lining, though it was hard to see many compensations for the Australians. This was no longer a contest but a celebration.

Next Roy was given out caught down the leg side by Dharmesena; he asked for a review that England no longer possessed and was so stunned by the decision, a poor one, that he had to be persuaded to leave the field by the other umpire, Marais Erasmus, and Root. Very briefly England took stock. Morgan was peppered by short balls but before long the romp continued.

By 5.15pm Australia had lost a World Cup semi-final for the first time. A new name will be etched upon the trophy on Sunday night.