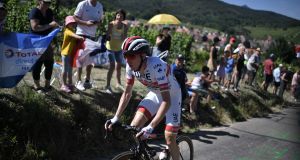 Ireland’s Daniel Martin rides to reach the pack after a flat tyre during the fifth stage of the 106th edition of the Tour de France cycling race between Saint-Die-des-Vosges and Colmar. Photo: Marco Bertorello/Getty Images

With Thursday’s first summit finish an important target for the general classification contenders, Dan Martin focussed on saving energy on Wednesday’s undulating route towards Colmar. He finished in the same time as the winner Peter Sagan (Bora-Hansgrohe), crossing the line 66th. His cousin Nicolas Roche (Team Sunweb) was also in this group, netting 77th.

Martin had a moment of concern during the race, puncturing inside the final 50 kilometres. “The puncture happened in almost the worst moment of the race, but ten kilometres later would have been even worse,” he said. “Thankfully Jasper [Philipsen] was incredibly strong and Vegard [Laengen] and Sergio [Henao] were there also so it was a super team effort. Hopefully that's the end of my mechanicals for this Tour.”

Roche dropped one place to 20th overall due to the time bonus taken by Matteo Trentin (Mitchelton-Scott) for his third place on the stage. He is one minute behind the ongoing race leader Julian Alaphilippe (Deceuninck-QuickStep), while Martin improves one place to 35th. He remains one minute 28 seconds back.

Roche is chasing a stage win in the race, while Martin’s main aim is the general classification.

Thursday’s stage takes the riders to the summit finish of La Planche des Belle Filles. Martin was second there the last time the race visited in 2017, and it is a climb which could suit him very well. However he said that however things play out, that it is early days yet in the Tour.

“There are going to be a lot of questions answered on stage six but even then, I think we can’t really read much into stage six as far as the general classification goes,” he told the Irish Times. “It is a very different stage to what we are going to see later on in the race in the Alps, which are really going to decide the race.”

He said that any overall contenders who don’t shine need not panic. “I think it is going to be the case of almost limiting your losses and being there or thereabouts. If it doesn’t go amazingly well, it is not the end of the world and you haven’t lost the race. This first ten days, it is all about staying in contention.”

Notwithstanding that, though, Martin has tended to perform strongly on uphill finishes in the first week of the Tour and will try to do so again.