Peak numbers still a long way off the 8.4 million reached for historic 2005 series 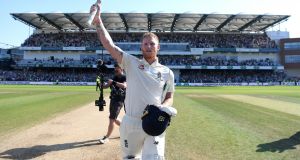 Ben Stokes and the miracle of Headingley resulted in Sky’s highest audience for a day of live Test cricket, with a peak of 2.1 million UK viewers switching on as England levelled the Ashes in dramatic fashion.

The figure is dwarfed by that for the World Cup final between England and New Zealand last month – another match-winning performance from Stokes – that peaked at 8.7 million in the UK after Sky (3.5m) opted to share its live broadcast with Channel 4 (5.2m).

But while the partnership was a success – the final beat the 8.4m peak audience on day four of the 2005 Trent Bridge Test, when Channel 4 held the rights – a repeat deal with a free-to-air broadcaster is not expected during this Ashes series.

Channel 5 has reported an audience of “over” 2 million for the one-hour highlights package that followed day four at Headingley, while BBC’s Test Match Special claimed similar figures to its coverage of the World Cup final with 1.3m requests on the day via its online platforms.

The frenzied finale to the third Test, in which Stokes (135 not out) and No 11 Jack Leach (1 not out) put on 76 runs for the last wicket as England chased down an improbable 359 to win, left the Australia coach, Justin Langer, ruing his side’s use of the decision review system.

Nathan Lyon believed he had trapped Stokes lbw for 131 when England were two runs away from the target, only for Joel Wilson, the on-field umpire, to turn down the appeal. The Hawkeye projection suggested it was out but with the captain, Tim Paine, having burned his team’s last review in the previous over – a speculative lbw against Leach from a Pat Cummins delivery shown to have pitched outside leg – the on-field decision stood.

The tourists have made nine unsuccessful reviews in the field during the series, and Langer said: “We’ve been really poor at it this whole series. We’ve talked a lot about getting better at our reviews. We’ve got a way we go about it but sometimes you don’t quite get it right. The one off Pat Cummins was getting pretty desperate at the end and that often happens. That’s just how it works out.”

Australia’s tour continues with a three-day match against Derbyshire from Thursday and with Steve Smith back after missing the third Test with concussion and his stand-in, Marnus Labushagne, having made three successive half-centuries, the opener Marcus Harris and Usman Khawaja may be playing for one spot.

Langer said: “We can’t fit them all in, that’s one issue we’ve got. One thing I do know is we’re not batting well enough at the moment. I said at the start of the series the team who bats best will win the Ashes.” – Guardian