Sailing: Mojito in mint condition for a crack at Coastal Series honours 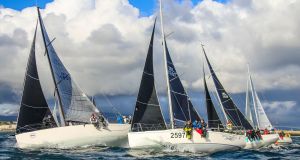 ISORA is only one of several fleets heading to the Garden County as Dublin yacht club feeder races will produce a total fleet of nearly 100 boats for the annual Taste of Greystones Regatta this Sunday.

The 14th race in the Irish Sea offshore calendar begins at 0955 am on Saturday, and the aim is to race over 40-miles before finishing off Greystones, but with the light air forecast, the course for the final race will not be published until Friday.

Challenging Mojito for coastal honours is Royal St George’s J97, Windjammer, (Lindsey J Casey & Denis Power) that is only 2.6 points off the lead.

Dublin Bay Sailing Club (DBSC) is also sending a fleet south on a ‘passage’ race for participating classes in Cruiser Classes one, three and five.

Sunday’s one-day east coast regatta has averaged over 100 entries for its last four years off Bray Head making it one of the largest Irish keelboat regattas of its type.

At the 29 Europeans on Lake Garda in Italy this week, Royal Cork youth pairing Atlee Kohl and Chris Bateman, sailing for the US Virgin Islands, are lying 12th overall.

Irish RS400 star Barry McCartin will come up against stiff English competition this weekend when the Royal North of Ireland Yacht Club hosts the class UK and Irish National Championships on Belfast Lough.

It’s the first time this event has been hosted in Irish waters, and also the first time that both the UK and Irish fleets have been combined. A 56-boat fleet includes former Laser ace Mike Simms and class champion, Nick Craig.

Despite achieving four top-ten finishes, Ireland’s best performer Finn Lynch could not take a medal race place at the Olympic Test Event in Japan this week. The Carlow sailor who still seeks to qualify for the 2020 Olympics in less than a year will, however, be encouraged by his fifth-place finish in the final race on Wednesday and 13th overall in a powerful field.

Meanwhile, Lynch’s Rio team-mate Saskia Tidey looks sure to take the British nomination in the 49erFX class having won bronze with Charlotte Dobson this week at the ‘Ready Steady Tokyo’ regatta. The Royal Irish Yacht Club sailor from Dun Laoghaire opted to join Team GB after 2016.

More than 250 people with physical, sensory, intellectual and learning disabilities take to the water for the third annual Watersports Inclusion Games in Kinsale this weekend.

This year’s participants will have the opportunity to try more sports than ever before, with an expanded range including sailing, kayaking, canoeing, paddle-boarding, rowing, surfing, water skiing and powerboating all on offer. The Games take place at Kinsale Yacht Club in Co Cork on 24th-25th August.