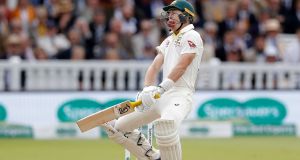 Marnus Labuschagne of Australia is struck on the helmet by a delivery from Jofra Archer of England during day five of the second Ashes Test at Lord’s. Photograph: Ryan Pierse/Getty Images

Anyone predicting that Marnus Labuschagne would be the man to shepherd the Australians towards safety in this Test match might well have been led off to a darkened room to undergo testing for concussion. Two days ago this scenario was unthinkable. Yet on the final day of a Test match that kept us all intrigued to the end there was Labuschagne, an adopted Queenslander recently of Glamorgan, batting through 30 overs to allow Australia to head for Leeds with their 1-0 lead intact.

Earlier in the day Labuschagne became the first ever concussion replacement in Test cricket. To no one’s surprise Steve Smith woke up “with a bit of a headache and a feeling of grogginess” and was withdrawn from the match by the Australian team doctor, Richard Saw. Hence Labuschagne was drafted into the team. After this innings, batting in Smith’s slot at number four, he may stay there for a while.

He came up against an England side scenting an unlikely victory via the unaccustomed services of Jofra Archer and Jack Leach, who shared six wickets between them. By the same token Australia were indebted to the resolution of equally unlikely characters, Travis Head and Labuschagne.

Labuschagne was born in South Africa and lived there for 10 years before his family emigrated. One profile on a leading website explains that he grew up speaking only Afrikaans before making this starling observation: “He only became fluent in English after moving to Australia.” He has also become fluent at striking a cricket ball.

The circumstances of Labuschagne’s entry into this Ashes series could hardly have been more demanding. With 48 overs to bat Australia were 19 for two in their sixth over and Archer was on the rampage again, having removed David Warner and Usman Khawaja in swift succession. His first ball was a bouncer, which flew over his head; his second was a little fuller; it jagged up the slope a fraction and thudded into the grille of the helmet. Labuschagne fell to the ground and then sprung back up again like a startled boxer. Earlier there had been much talk of “like for like” replacements but this was taking the letter of the law too far.

Once again Archer had eyes popping with his effortless pace combined with the capacity to maintain a testing line. Both Warner and Khawaja had prodded tentatively – no one lunges forward at Archer – and Australia were rocking. Labuschagne may have played and missed a few times against such pace but he gave the impression of enjoying the contest. Soon he was middling the ball for most of the time during a critical innings of 59.

After tea Australia lost Cameron Bancroft, who was lbw to a scuttler from Leach but Labuschagne continued to play his natural, forthright game. So too did Head though he was badly dropped on 22 at second slip off Ben Stokes by Jason Roy, who has had a match he might like to forget – though that may not be so easy.

Even Labuschagne’s dismissal, like his arrival on the scene, was freakish. A full-blooded sweep against Leach ricocheted from the thigh of Jos Buttler at short leg and Joe Root after many replays was judged to have taken a clean catch. Leach immediately had Matthew Wade snapped up at bat-pad; then Joe Denly pulled off a stunning one-handed catch at square leg to dispatch Tim Paine off the bowling of Archer.

In the end the match was an honourable draw but the presence of Archer, the successful recall of Leach and the possible absence of Smith at Headingley changes the complexion of the series. Archer, provided he is not overbowled, is a fantastic new asset and while Labuschagne responded to his call-up quite brilliantly any Test side is weakened if Smith is removed.

At the start there was still the possibility of an England defeat. Despite a 70-minute delay due to rain they had some serious batting to do, albeit in the knowledge that Smith would be taking no further part. They began warily. In the first half-hour Buttler mustered two runs and while Stokes at the other end advanced more quickly the runs did not necessarily come from the middle of his bat. For a while Stokes needed all his phlegm to survive, a quality with which is well-endowed nowadays, especially against Lyon.

A couple of reviews were tried by Paine but neither were worthwhile. It is clear that in later life Paine, as a former captain of Australia, who has conducted himself impeccably throughout a stormy period in their Test history, will have many suitors eager to employ him but they are unlikely to include anyone from the ICC who is charged with the task of recruiting for their elite panel of umpires.

After lunch Buttler departed for 31, hooking at Pat Cummins for the first time. This was a modest innings in terms of runs and an extremely slow one by his standards, but it was valuable one. Meanwhile Stokes became ever more forthright, charging to his seventh Test century and his first since August 2017.

Suddenly he became the Lyon tamer, thumping two consecutive sixes over mid-wicket, and advancing down the pitch to Peter Siddle. It was a brilliant innings of two halves and a clear vindication of the tweak to the order. Stokes had come out at five rather than Buttler and that now seems the better option. Stokes and Bairstow in skittish, number seven mood added 97 in 14 overs, whereupon Root enjoyed the rare luxury of a declaration. He has another luxury to hand now, the gem that is Jofra. – Guardian