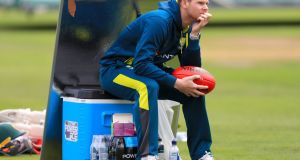 Steve Smith has been officially ruled out of Thursday’s third Ashes Test at Headingley following the delayed concussion inflicted by a Jofra Archer short ball.

Australia’s premier batsman was struck on the neck while batting on day four of the draw at Lord’s and though he resumed his innings 40 minutes later – initial concussion tests were passed – the next morning saw Smith report headaches and dizziness.

When the 30-year-old then failed a cognitive test, he was substituted out of the match under the new ICC concussion protocol. Marnus Labuschagne came into the XI and, while he too was struck on the grille by Archer second ball, a resolute 59 from the right-hander helped deny England victory on the final afternoon.

Smith, whose twin centuries at Edgbaston the week before had helped set up a 1-0 lead for the tourists, admitted on Sunday that he would need to have cleared all tests and be training two days out from the third Test to stand any chance of being selected.

But on Tuesday he was a bystander at practice before Justin Langer, the head coach, confirmed he would not be ready in time.

Meanwhile Britain’s sports minister, Nigel Adams, has condemned England cricket fans who have been booing Smith, calling their behaviour “distasteful” and saying it is time for the jeering to stop.

Smith and his teammates David Warner and Cameron Bancroft have been roundly heckled during the current Ashes series for their involvement in the ball-tampering scandal in South Africa last year, for which Smith and Warner received 12-month bans and Bancroft a nine-month suspension.

Adams on Monday joined a chorus of condemnation aimed in particular at England fans who booed Smith when he returned to the crease to resume batting at Lord’s on Saturday.

“The vast majority of the Lord’s crowd were on their feet applauding Steve Smith after his innings but a small amount of booing from a tiny element of the crowd has made the news,” Adams told the Sydney Morning Herald.

“It’s distasteful and we have to remember that the Aussie players who got themselves into trouble have been punished and done the time. “Smith, in particular, is a brilliant batsman and whilst of course, I don’t want him getting too many runs while he’s over here, he’s mesmerising to watch and as genuine sports fans we should be applauding him, not jeering.”