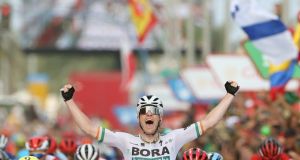 Sam Bennett has triumphed on the first sprint day of the Vuelta a España, comfortably taking the third stage of the race and, with it, his first-ever victory in the Spanish Grand Tour. The Irish road race champion had little difficulty in taking the gallop to the line in Alicante, storming through with about 100 metres to go and winning by two bike lengths.

The success is his 12th of the current season, and confirms the Bora-hansgrohe rider as one of the very best sprinters in world cycling. “I am delighted to get it,” Bennett said. “It means a lot to get another Grand Tour victory, especially in the Irish national champion’s jersey. I am very proud to win in this jersey.

“I felt so bad yesterday during the stage. Whether I went easy or hard, I felt bad. Thanks to the team, I could relax and follow them today. They got me in the right place at the right time to make my effort. If it wasn’t for the team effort today, I definitely wouldn’t have got it.”

Bennett said that things were complicated in the finale as the Bora-hansgrohe’s sprint train was disrupted by the Team Sunweb and Trek-Segafredo squads. “Sunweb closed us when we were coming with speed,” he explained. “We lost all our speed. Then Jempy [Drucker, his teammate] got out, brought us up to speed but just as Shane [Archbold, his leadout man] went to go on the right, Trek came and we got boxed in again. But I went with momentum to the left and got onto Trek.

“I knew there was a very fast final so I really wanted to kick first. I think Trek waited that little bit too long, because when you come from behind it is hard to accelerate back up to that. I was just happy [to get it].”

It was a good day for both of the Irish competitors in the race: Nicolas Roche (Team Sunweb) finished in the main bunch and retained the red leader’s jersey. He grabbed it on Sunday when he finished second into Calpe, and maintains his two second advantage over Nairo Quintana (Movistar).

Six years ago he also took the jersey, but lost it the following day. This time around, he was able to fully savour it, and will continue to do so on Tuesday’s stage.

“I am happy – it is one day more than the last time,” Roche said, referring to the fact that he will wear red again on stage four. “Today was a good day – it was quite a nervous stage. A lot of tension. We rode safely at the front. In the end there was no big issue, but it was quite nervous and stressful the whole day long.”

Tuesday’s 175.5 kilometre stage is undulating, and features a third category climb 46 kilometres from the finish in El Puig. Roche said it is vital to keep concentration and be prepared for unexpected attacks. “In this region, the wind plays a big role. The roads are quite open, so you have going to have to be on your toes on the time.

“I didn’t expect attacks on the climb with 50 kilometres to go today, which was quite some tactic. So you have to be always aware, always ready, always on the front and that is the difficulty of riding a three week stage race.”

King of the mountains

1 Next stop the Champs-Elysées in green for Sam Bennett
2 Saracens’ emphatic opening salvo enough to keep Leinster at bay
3 Maro Itoje proves he has no peer in the northern hemisphere
4 Born to ride, born to win: Sam Bennett, the making of a green machine
5 Garry Ringrose: Leinster’s defeat to Saracens is ‘heartbeaking’
Real news has value SUBSCRIBE