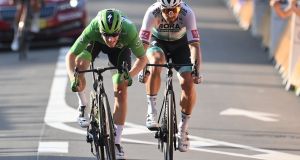 Ireland’s Sam Bennett edges out Peter Sagan of Slovakia at the finish line on stage 19 of the Tour de France. Photograph: Marco Bertorello/AFP via Getty Images

It was singled out as the last possible threat to Sam Bennett winning the green jersey in this year’s Tour de France, and instead the stage 19 finish at Champagnole turned into the mere affirmation of it. The last stop surely all set now for the Champs-Elysées on Sunday.

It turned out to be another day for a double stage winner too, and while Bennett was right in contention for that prize going into the last 20km, it was Soren Kragh Andersen who broke off the front of the 12-rider breakaway to claim the victory, just as he did in last Saturday’s stage 14 finish in Lyon, a third stage win for his Team Sunweb.

Bennett crossed the line just over a minute back, in eighth place, affording himself a gentle fist pump and not so gentle roar of delight and satisfaction and relief all rolled into one. They call Champagnole the Pearl of the Jura and it certainly felt glistening for Bennett at the finish.

“Yeah, just really pleased with myself that I kept so strong on the day, didn’t break, I was pretty happy about that,” he said. “I know there’s still more to go, but again today was such a crucial day.

“We’re still going day by day, it’s still not finished, but today was the most dangerous day, the most critical day. I just want to thank the team again for the amazing job they did, to be honest I think I even out-performed myself today, I didn’t expect to be able to ride the stage like that.”

Having already gained another point off his Slovak rival Peter Sagan at the intermediate sprint at Mournans, which came late on in the 166.5km from Bourg-en-Bresse to Champagnole, Bennett then made sure he gained a couple more at the finish, that eighth place on the line, again just ahead of Sagan, worth another two points to his tally

That leaves the Irish rider 55 points clear, 319 to Sagan’s 264, with the Italian Matteo Trentin still sitting third with his 250. With no sprint points on offer on Saturday’s penultimate stage, the 36km time-trial to La Planches des Belles Filles, Bennett will only need to stay upright on his bike as far as the Champs-Elysées on Sunday to make the winner’s race podium after the final stage showdown.

Crucially, once those intermediate sprint points were in the bag, and Bennett found himself part of the 12-rider breakaway going into the last 25km, he and his Deceuninck-Quick Step team-mate Dries Devenyns never once let Sagan off their wheel, the Bora-Hansgrohe rider at that point isolated without any team-mates; Bennett and Devenyns weren’t in the mood to help set the pace either.

“I know, it must have been very frustrating for the other guys, and I apologise for that,” said Bennett. “But that’s more of a compliment to how strong the other guys are more than anything else, because that was the only way I could race.

“I was just trying to mark him [Sagan] as much as possible, and I know that must have been really frustrating for him and the other guys, but that’s the way I had to race today. Sagan wasn’t complaining, he knows the deal, and I’d do the same, would do everything I can to get him off the wheel. But there was no trash-taking or anything like that, it was all body language, that sort of thing.

“Even after that [breakaway], and it was just lucky we got on really, I did have to completely forget about the stage, today was all about the jersey. Obviously if I was there at the end I’d have gone for the stage, but when those points went away, and there is such a gap, it was just about trying to keep the lead in the jersey.”

Indeed once Kragh Andersen made his break, with 16km to go, he quickly opened up a winning gap, the 26-year-old from Denmark finishing 53 seconds ahead of Luka Mezgec (Mitchelton-Scott), with Jasper Stuyven (Trek-Segfredo) third, Bennett finishing 1:02 back.

“Two wins in the same Tour de France, I’m speechless, I could never have dreamed about something better,” said Kragh Andersen.

“When the group was there, they had all the best riders in the world on hilly terrain, and I thought ‘how do I beat these guys?’ The moment came after he [Trentin] attacked really hard, and I was also at the limit. I thought that if I just got a small gap, they might look at each other, and that is exactly what happened. That was my luck.”

Race leader Primoz Roglic was content to take things handy ahead of Saturday’s time-trial, finishing in the main peloton, over seven minutes behind, the Jumbo-Visma rider maintaining his 57-second lead over Tadej Pogacar from UAE Team Emirates, both Slovenian riders still a safe distance away from Miguel Angel Lopez, who remains third, 1:27 behind.

There is some potential for the overall leaders to change on the 36km time-trial uphill to La Planches des Belles Filles, although Bennett can afford to sit back: “I wouldn’t say it’s a day off tomorrow, but a less stressful day on the head, yes. Today was all about being mentally strong, really going for it, just racing my own race, within the race. So still a bit of work to do, but getting closer to Paris.”

Indeed anything can still happen, Lukas Pöstlberger also of Bora-Hansgrohe abandoning the stage early on after being stung in the mouth by a wasp and requiring medical assistance. Bennett knows he’s not in Paris yet, only affirmatively closer.