For all his faults, the disgraced cyclist’s daily podcast on the Tour is undeniably entertaining 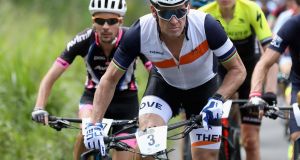 Lance Armstrong: throughout The Move he’s at times as self-mocking as he is unequivocally unapologetic, often both subject and butt of his own many jokes. Photograph: by Ezra Shaw/Getty Images)

Does it feel like you’re waking up each morning at a different time and in another place?

Have you being staying mostly inside during the day even though you’re completely asymptomatic? Are you sometimes caught for breath and lost for words and find yourself occasionally using Google translate?

Then maybe like me you’re simply stuck somewhere inside the bubble that is this year’s Tour de France and still trying to make sense of some of the guilty pleasures that have come with it.

Because it can be a strange and unusual place, where there is no sense of time and then time suddenly races away, and stranger still when you’re going to bed each night somewhere in Aspen, Colorado quietly laughing and trying not to smile as you listen to Lance Armstrong. Oh, Mama, can this really be the end?

Especially after swearing you had enough of Armstrong’s blues already, that two-part ESPN documentary Lance that aired in May forever staying deliberately unwatched. You know what they say about being nice to the right people on the way up, sooner or later you’re going to meet them on the way down.

Armstrong wasn’t very nice to a lot people on his way up or down, even in and around his final fall from grace after the 2012 federal investigation into the systematic doping at his old US Postal cycling team. Even eight years after that not many people like to admit there is anything nice to like about Armstrong – and nor should there ever be.

So maybe it’s being lost in the Le Tour bubble and the occasionally dizzy heights that come with that can help explain some of the draw of The Move, Armstrong’s daily podcast on the Tour which for the last three weeks now has been by turns touchingly informative and hilarious rubbish, part comedy sketch, part impression show, part product placement, the perfect blend of insight and bullshit, and all and nothing about the bike.

The Move has been going out for the last four Tours already, a sort of spin-off of Armstrong’s more regular podcast Forward, where he interviews people outside of cycling, from his home in Austin, Texas.

For some unknown reason The Move is coming from Aspen, at 8,000 feet in the Rocky Mountains, also known as John Denver country, where Armstrong is joined each night (or morning, depending on where you bubble is) by his former loyal domestique George Hincapie, along with his friend and Austin disc jockey JB Hager.

They used to say the only crime in New Jersey was getting caught, and at times Armstrong, who turned 49 on Friday, still gives that impression about his own cycling career. What can’t be denied is that throughout The Move he’s at times as self-mocking as he is unequivocally unapologetic, often both subject and butt of his own many jokes.

With repeated F-bombs and occasional theatrics (The Move also goes out on YouTube), Armstrong and Hincapie also go where a lot of the other cycling commentators and reporters feel like going, only for a variety of reasons can’t quite go.

Such as after Stage 5, when Armstrong is trying to make sense of Wout van Aert after the 25 year-old Belgian rider produced another superlative win into Privas: “To see him, making everybody suffer on the climb yesterday, then come back and win a field sprint today, what can this guy not do? There are people in the back of their minds going ‘huh?’ Because he can time trial too...” before Hincapie politely interrupts.

That being the same stage where race leader Julian Alaphilippe lost his yellow jersey after picking up a 20-second penalty for an illegal feed in the last 20km, and while Hincapie is trying to make sense of that, Armstrong is heard whispering out loud “ketones!”

As for the numbers being rolled out by riders such as van Aert, or Stage 12 winner Soren Kragh Andersen who admitted to averaging 500-600 watts, Armstrong says: “Those are crazy numbers. But you know what the great Jay-Z says? ‘Men lie. Women lie. Numbers don’t.’ Okay? So, incredible.”

Banned from any official role in the Tour, as he is from sport for life, Armstrong only occasionally references the seven times he won the race, before being stripped of them all, and while any vengeance may be well hidden most of his confidence and bravado is still intact.

The Move is also serving him well on other fronts, Bloomberg Businessweek reporting that for the past two Tours, it has generated $1m in revenue.

Hincapie, as he did on the bike, still shares a lot with Armstrong, even though he was the first to come clean on his own doping past to US investigators in late 2012; he’s no fear calling him out now, reminding Armstrong of his attempts to speak Franglish, with phrases such as “le premier time-check”

“Listen, I’ve been through so much shit in life, nothing embarrasses me anymore. I don’t give a f**k about much, or anything. But that is so embarrassing, look, I flush. We’ve got to be done with this...”

It’s hard not to laugh at his deliberately funny pronunciation of the Slovenia duo Primoz Roglic and Tadej Pogacar, or his frequent imitation of Peter Sagan – “We make party”. But it’s the occasionally softer side too that perhaps makes this so listenable after all, like when Armstrong reflects on Sam Bennett’s first stage victory into Île de Ré.

“We saw how emotional Sam Bennett was. He was apologetic. It finally set in, when he was doing the post-race interview, and then he just started crying. And he said ‘I’m sorry, I don’t want to be a cry baby’. Man, let me tell you something. You ain’t no cry baby, alright? You just won a stage in the Tour de France, a nervous day, you’re in the green jersey, f**k, I don’t care what you do!”

Which in Le Tour bubble at least sounded perfectly genuine.