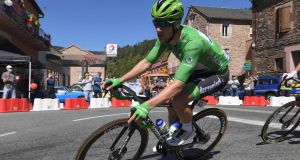 Described in the Tour itinerary as a “golden opportunity” for the sprinters, provided the wind doesn’t blow them off course, Sam Bennett admits to having his eye on two prizes come Tuesday’s stage 10 finish at Île de Ré: first, and then green.

It is possible Wednesday’s stage 11 finish at Poitiers may also have his name on it: it was here that fellow Carrick-on-Suir rider Seán Kelly won the first of his five stages in the Tour de France, back in 1978, the then 22 year-old first in the bunch sprint on the banks of the Clain river.

Either way, these are two of the last properly flat stages before the Tour rolls into Paris on Sunday week. For the 29-year-old Bennett, who has finished second, third and fourth in the opening week, the elusive stage win and the winning back of the green jersey are still happily jostling for position.

“I came here saying I’d go for a stage win first, and if the green jersey is in sight, then I’ll go for that too,” said Bennett, speaking on Monday’s rest day via a Zoom call at the Deceuninck-Quick Step team hotel. “Even the day I got the green, was really happy to get it, but we didn’t win the stage, then lost the yellow jersey, so mixed feelings. I’m definitely still dreaming about that stage win.

“I think a lot of days I’ve came out more confident than I was going into the stage, if that makes sense. I think it’s often easy to doubt yourself when it’s such a big race, and such a big occasion, but actually when I go to race the legs are there, so I definitely feel strong enough to win a stage.

“I really do think it is doable, but there are 160-odd riders trying to do the same thing, so it’s never going to be easy, and if you don’t get it exactly right, there is always someone else there to take the opportunity.”

Stage 10, the 170km spin from Île d’Oléron to Île de Ré, is mostly pancake flat, only without much shelter, particularly over the 2.9km bridge that connects La Rochelle to the island of Île de Ré. Bennett has had little problem getting to the front of the bunch sprints so far, but as stage 3 proved, when Caleb Ewan from Australia stole past to deny him on the line, that’s only half the battle.

“But then because he was coming from a distance, getting sucked along with the headwind, was getting a good slipstream, he came fast, so quick, that was frustrating. But I also saw it that it is doable, to get a stage win here. The same when Wout van Aert won, and I took green. Even with 5k to go and I thought I couldn’t even get the front, but once you keep pushing eventually you do end up at the front in the last km. In the last 500m riders are blowing up or coming back and the road opens up. So I still think it can be done.”

What is certain is that Bennett will not be content to have worn that green jersey for two days: he remains just seven points behind Peter Sagan, 138 to 131, having clawed two back on the Slovak rider in Saturday’s intermediate sprint.

“It was a really enjoyable moment in the Tour, but at the end of the day I haven’t won the green jersey, and I feel it would be too easy to settle and say ‘I’ve already won something’, when in fact I haven’t really won much, I just held it for two days. I think I should definitely take some confidence away from this Tour, but I haven’t yet completed anything I came here to do. So the pressure is still on.

“When I found myself within a few points, thought it would be a nice experience to have it, and then went for more sprint points, in the intermediates. Then having the green jersey was something special really, I got a bit of a taste for it, liked it, didn’t want to let it go. That’s given me a bit of a hunger for it.

“The green jersey is more about being consistently up, every day, and three parts really. From the start, looking at the guys in the break and making sure you don’t miss points, then you’ve the intermediate sprint, then you’ve the final, so you never really get to switch off, whereas before, when I’m just going for stages, I could relax a bit. But I was here to try and get a stage win, so the next two days are going to be about the stage win, and also keeping an eye on that green jersey.”