IRFU, FAI and GAA outline grave picture and say it is critical supporters are allowed back

Senior officials from the GAA, IRFU and the FAI have warned the Oireachtas committee on Covid-19 response of the financial hardships their associations face should sports matches continue to be played behind closed doors long-term in Ireland. 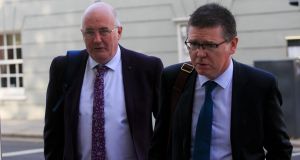 The GAA’s John Horan and Tom Ryan arrive at an Oireachtas Committee on Covid-19 on Friday. Photograph: Gareth Chaney/Collins

Officials from the governing bodies of Gaelic games, rugby and soccer appeared before the Oireachtas Committee on Covid-19 Response at Leinster House on Friday morning to outline the impact of the coronavirus pandemic on their respective sports, each detailing the “catastrophic” effect on their finances.

Browne went as far as suggesting that if a “meaningful” number of spectators weren’t allowed attend international and provincial games soon, “the very existence of professional rugby on the island would inevitably be under significant threat at some point in time in 2021”.

“Pre-Covid, our financial situation was looking quite positive, now we are facing an unprecedented cash flow crisis,” he said. “The absence of a clear pathway to the return of spectators in meaningful numbers means that our perilous financial situation will continue to deteriorate at an alarming rate in to 2021, moving to an unsustainable position by the third quarter of that year if we do not take certain actions.”

“Irish rugby’s net losses in 2020 are catastrophic and are forecast to be in excess of €30 million. It is anticipated that the IRFU and the provinces will continue to burn at least €5 million a month, primarily on professional wages and costs,” he said, adding that the Union will be forced to start borrowing in January.

“This is not a sustainable position. Our audited financial statements for the period to July 31st, 2020 will show a record financial loss of more than €35 million. Back in January 2020, we were forecasting for a planned deficit of only €3.5 million. We are unable to invoice for €32 million of 2020 tenure ticket renewal monies due.”

“Until we can admit spectators in meaningful numbers in to our stadia and return to some level approaching self-sustainability, the whole rugby infrastructure built over the last 150 years is under threat.”

The message from the FAI was no less stark, with Owens revealing that the Association has this week asked for additional state support of €19.2 million.

“Irish football, and in particular the FAI, has faced many challenges in the past 18 months and Covid-19 has only served to increase the significant pressure on all of us who love Irish football to ensure our game can survive. We have gone from one crisis to another through no fault of the 100s of thousands people who devote valuable time and energy to our great game.”

“The harsh reality is that our association will not survive financially without fans attending our international and League of Ireland matches. The financial cost of Covid-19 to the Association is serious, and for the second time we need your support. This time we are not responsible and we are not alone. That is why we have applied this week for support funding of €19.2m from Sport Ireland.”

Ryan, meanwhile, outlined a similarly bleak situation for the GAA. “To say our financial predicament is stark would not be an overstatement. In 2020 alone there will be a €50 million hole in our finances,” he said, adding that the Association anticipated further losses in 2021 of around €20 million.

The three bodies stressed that it is critical that larger numbers of supporters than are currently permitted are allowed attend games, with Owens saying that he feared for the future of League of Ireland clubs in particular, 80 per cent of whose income, he said, comes from ticket sales, should there be no change. “We are now entering really dangerous territory for them,” he said, “they cannot survive without fans attending games.”

And all three appealed for the rules regarding social distancing to be relaxed. “Social distancing at two metres would generate an approximate attendance at the Aviva Stadium of 7,000 people, unfortunately that’s going to make absolutely no difference whatsoever to our financial situation,” said Browne. “Social distancing at one metre would bring us up to around 18,000 - it still wouldn’t solve the problem entirely, but it would help. We are three responsible organisations,” he said, insisting that they could all ensure the safe return of supporters to games.

Owens echoed that point.”I do think we can get fans back in to the grounds in a safe environment, I think there is a significant difference between two metres and one financially - if we can get to one metre, that would make a big difference, it’s a critical goal for us.”

The GAA, FAI and IRFU will, said Owens, put a formal proposition to the government this week outlining ways in which they believe spectators can safely return to games, although Ryan added that “in the weeks and months ahead, we must all contemplate living with the virus and with an acceptable level of risk”.

Horan, meanwhile, spoke about the impact on people for whom attending games was an intrinsic part of their lives.

“While it has been difficult to quantify the loss of games to communities and people across the country,” he said, “we know from the outpouring of positivity on their return how badly they were missed. For many, the games and associated activity provide a pulse and a rhythm to their lives and communities.”

“The social outing that was the stroll to the local field and the accompanying catch-up was sorely missed by our more experienced members, many of whom were housebound for long periods. It was a way of living which we never thought we would have to contemplate losing.”

1 America at Large: Golfers guilty of legitimising Trump’s toxic regime
2 Ireland, France or England? Who needs what to win the 2020 Six Nations
3 Solskjær’s stock is on the rise again after clever squad rotation
4 ‘This is not a personality contest’ - Jack Nicklaus endorses Donald Trump
5 Gael Fickou shifted to the wing as France name their XV
Real news has value SUBSCRIBE