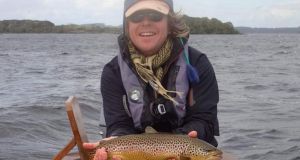 Tom ‘Doc’ Sullivan with his 3lb fish on a Green Peter, also on Lough Corrib 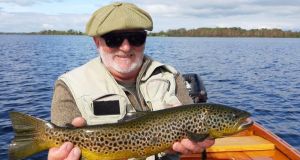 THE majority of anglers and service providers on Lough Corrib last week described the fishing as “patchy” – and that includes those fortunate to catch a fish. According to fisheries officer Declan Gibbons the main reason for the downturn was due to rising lake levels and changeable wind directions. The drop in temperature also contributed to sparse sedge and olive hatches in localised areas.

In the Cornamona area, Tom “Doc” Sullivan (tomdoc.com) guided Tim Cahalane from Killarney for a day and managed two trout on a dry foam daddy and dry deer hair sedge. Tom himself fished for an afternoon and caught a 3lb-plus trout on a wet green peter.

John Somerville jnr guided 83-year-old John Watson and Colm Murphy, and together, they caught three good trout on silver dabblers. (This is John’s 50th year to fish Corrib and guided by a third generation of the Somerville family.)

In the Oughterard area, Basil Shields of Ardnasillagh Lodge (091 552 550) said it was a tough week for fishing. The few that had action were Mark Robinson from Northern Ireland with three on wets and dries, and Ronan Cramer and David Donnelly from Cork had two each on their respective days.

*On Sheelin, 19 fish were recorded with the majority of catches happening in early morning and late afternoon. Weight of the week went to Franciszok Zielinski’s with a five-pounder on a Minkie, at the back of Church Island. Also, Vincent Kelly had a two-pounder on a Mick Kelly Stimulator while drifting into Gaffney’s Bay.

*Natural Resources Wales (NRW) has published a five-year action plan to help safeguard angelsharks – one of the world’s rarest shark species, which can still be found around the Welsh coastline.

The plan has been developed with organisations from across Wales in response to the limited understanding of the ecology and status of this critically endangered species and sets out a series of initiatives to safeguard its future.

Ben Wray, marine ecologist at NRW, said: “It’s hugely exciting that we still have an angelshark population in Wales, and the collaborative working over the last two years has significantly improved our understanding of this very important species.”

*Professor Ken Whelan is holding a series of freshwater detective and small stream characterisation courses with the second happening this weekend in Co Louth on September 19th/20th.

If you would like to participate, details and registration forms are available at louthwatersproject.com/index.php/would-you-like-to-become-a-freshwater-detective/

This week’s course will be held in north Co Louth (stream to be confirmed). On Saturday an online Zoom class will consist of questions and answers from 10-4pm, followed on Sunday with a field course from 9.30am-1pm/2pm-5pm.

Additional courses are planned for counties Longford, Roscommon and Kildare in the very near future. For further information, email: ken.whelan@hotmail.com.