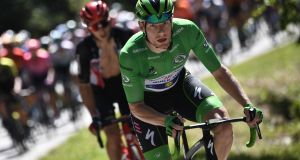 It’s not exactly all downhill from here, but when you’ve already rode up the best part of 58,000 metres – roughly the equivalent of climbing Mount Everest on a bike six and a half times – the rest of this Tour de France might well feel that way.

Especially for Sam Bennett, who has survived and in parts thrived on the three days of Alpine climbing in this year’s race, finishing stage 18 at La Roche-sur-Foron close to the Swiss border looking ever more comfortable in his green race jersey.

With only three stages to go, including the inevitable sprint finish of a climax down the Champs-Elysées on Sunday, the Irish rider now has 52 points to spare on his Slovak rival Peter Sagan. It should only be about staying upright from here on.

The stage itself belonged to Ineos Grenadiers, formerly Team Sky, who salvaged something from what looked like being the embarrassment of Tour wreckage to finish one-two – Michal Kwiatkowski from Poland awarded the win after his team-mate Richard Carapaz from Ecuador conceded his wheel on the line.

Again finishing well within the time limit, 31:32 down in 137th place, Bennett, who had gone into the stage 47 points ahead of Sagan, promptly extended that to 52, winning the 20 points that came from the intermediate sprint at Aime, after just 14km, with Sagan only managing third behind Matteo Trentin.

There is no denying now the fastest rider in this race –as Bennett now leads the green jersey classification with 298 points, to Sagan’s 246, and Trentin’s 235

“Yeah, I’m pretty tired again, but I knew the start of the stage was pretty important,” he said. “If the boys got a little bit ahead of me, Trentin and Sagan, so my focus was really on that intermediate sprint first, and then the rest of the stage, which was no so pleasant.

“But we found ourselves in a big enough breakaway group, and I think some of the guys weren’t so happy with me, when I would follow the guys to the front [Sagan and Trentin], and wouldn’t roll through, I was kind of playing cat and mouse with them, just trying to interrupt their race.

“So I was happy to get the points. What is it, over 50 points ahead now? That gives me a little bit more security, in case something happens, because at the minute there is still a lot that can go wrong. But it was good to be up the front too, because it meant when I got to the first big climb, I could set my own tempo, had some time to settle in. I just didn’t expect them to come so fast from behind.”

Friday’s rolling stage 19 finish at Champagnole may well throw up some significant green points, and the Champs Élysées certainly will, but with the still full support of his Deceuninck-Quick Step team-mates, Bennett sounds aware and ready too for whatever Sagan’s Bora-Hansgrohe team might try salvage from here.

“Yeah, but this is not going to be a soft one to Paris,” he said. “I am getting more optimistic, but at the same time I’m trying not to think about.”

Riding his seventh Tour, runner-up on several previous stages, it was a first Tour stage win for Kwiatkowski, the 30-old from Poland one of the old faithful guard of the former Team Sky. Riding alone together for the last 60km of the 168km run from Méribel, which featured four categorised climbs before the downhill finish into La Roche-sur-Foron, Kwiatkowski, the 2014 world champion, and Carapaz, last year’s winner of the Giro d’Italia, had ample time to savour the moment, no doubt shared by team manager David Brailsford.

“That was some day,” said Kwiatkowski. “I can’t describe how grateful I am to the whole team and to Richard [Carapaz]. It was an incredible day for us and I will never forget that. I’ve had some nice moments in cycling but that was something new. I got goosebumps for the last km because I knew that the gap was so big that we would make it. It’s incredible.”

Some consolation too for Carapaz, as his mountain points scored along the way – the duo part of the first breakaway that formed ahead of the first climb, the Cormet de Roseland – means he takes over the polka dot jersey from Tadej Pogacar. There is still some uphill to go yet, particularly in Saturday’s 36km individual time-trial from Lure to La Planche des Belles Filles, so that race may not be over just yet.

However there was no change in the current podium positions, Primoz Roglic from Jumbo-Visma maintains his 57-second lead over Pogacar from UAE Team Emirates, both Slovenian riders finishing at the front of the second main group, as did Miguel Angel Lopez, who remains third, 1:27 behind, after winning stage 17 on the brutal Col de la Loze.

It’s hard to see that picture changing before Paris now: despite suffering a flat tire on the gravel road over the Plateau des Glières, the last big climb of the day, Richie Porte got back into the second group too, and remains fourth overall, 3:06 behind.

The 58,000m in overall climbing in this year’s Tour, the highest in the race history, might well have suited a fully fit Dan Martin, although he rode much of the race still feeling the effects of a broken bone in his back sustained two weeks before the start. The Israel Start-up Nation rider finished the day in 109th place, 31:25 down, and now sits 42nd overall. Nicolas Roche from Team Sunweb also survived the highest climbs of this year’s Tour, finishing 86th on the day, 28:51 down.

With no points on offer on the final uphill time-trial on Saturday, Bennett at least can perhaps start believing that Paris may well be all downhill from here.