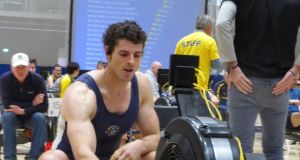 Philip Doyle after setting a new Irish record on the ergometer for 2,000 metres at the Irish Indoor Rowing Championships in Limerick. Photograph: Liam Gorman

The Ireland team’s programme for this Olympic year will be hectic: there is no place for the European Championships.

Yesterday, a forecast of troublesome winds claimed Muckross head of the river, which was fixed for Saturday at the National Rowing Centre. While the Ireland team trains at the venue, they will spend a lot of the year on the road.

High performance director Anonio Maurogiovanni outlined the schedule to The Irish Times. The heavyweight group goes into camp next week in Italy. There are two trials (February and March) before the first World Cup in Italy in April. The team goes to Lucerne in May for the third World Cup – and the Olympic qualification regatta for one, or perhaps two, women’s boats.

Final selection for July’s Olympic Games will then be made.

What could be a big team, with under-23 athletes and juniors joining seniors, will go to the World Championships for non-Olympic events in August in Slovenia.

The programme rules out the Europeans in June. A crew or crews could travel, but it is not a team event.

Maurogiovanni called last weekend’s Irish Indoor Championships “a great event”. Philip Doyle – wearing Superman socks – Sanita Puspure and Paul O’Donovan all set Irish records and Ronan Byrne (21) and Alex Byrne (19) both came in under six minutes for 2,000 metres. Maurogiovanni held back the lightweight women’s group, opting to prioritise “on the water activity” that week at the NRC, with an ergometer test coming next week.

Damian Browne finished second to Doyle in the open men’s category, then gave succour to those who struggled. The huge man had a long professional rugby career in Ireland, France and England and as an adventurer competed in the Marathon des Sables, climbed Kilimanjaro and rowed solo across the Atlantic. He said that the “pain and suffering” involved in time trialling for 2,000 metres on the ergometer “stands head and shoulders” above other tests he has set himself. “It will look into your soul and unveil the person you really are.”

Neptune in Dublin host a seminar by Mark O’Donovan on Saturday (February 1st) promising a new look at strength and conditioning. Coastal rowers have shown strong interest. Another seminar will be held later in the year.

Johnny Sexton circles the wagons and insists Ireland are improving 16:08
Dave Miley is the new Tennis Director for the Kazakhstan Federation 13:45
Spanish tennis player gets eight-year ban for match fixing 12:11
Thomas Bach to stand unopposed for re-election as IOC president 11:57
Sexton and Henshaw return to training ahead of Scotland clash 11:01