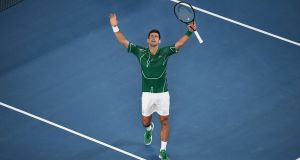 The longer they linger, the bigger the gap between Roger Federer and Novak Djokovic, and it has grown to the point where they might never again converge at a point of comparable greatness.

The 38-year-old Swiss has done it all, and stands alone for now with a record 20 slams, but losing to Djokovic, six years his junior, in straight sets in the semi-finals of the Australian Open on Thursday night in Melbourne – having shared Centre Court at Wimbledon with him over five sets in one of the great finals only last summer – has pushed the door wide open for the Serb.

If Djokovic wins his eighth title here on Sunday, he moves to within three career majors of Federer, whose prospects of adding to his tally are not as strong as they were, and two behind Rafael Nadal, whose castle remains in Paris.

Just as the younger Dominic Thiem was too strong for Nadal on Wednesday, so Djokovic’s stamina and strength were always going to stretch Federer, who had already played well over 12 hours to win five matches, two of them five-setters, both of which he could have lost.

When he saved seven match points in his quarter-final against Tennys Sandgren, he needed a medical timeout for a groin strain. He had that leg strapped for the semi-final and there were moments in some of the longer rallies in the two hours and 18 minutes in which he and Djokovic traded quality shots when his movement looked limited. Djokovic was pulling away at the end, to win 7-6 (1), 6-4, 6-3 and rarely has a scoreline been such an accurate barometer of the facts.

The first set was a microcosm of their rivalry. Federer blazed early – three aces in five minutes; after half an hour he held to love for 5-2 – before Djokovic worked his way into the story, and then they battled on level terms for awhile before Federer’s resistance waned. Even on two good legs, he would have done well to break down Djokovic’s defence once the fire went out.

For nearly 40 minutes, Federer was in near-total control. He’d struck 20 clean winners, eight of them aces. Then he briefly went missing and Djokovic, still fighting his own game, broke him to love. That was the turning point. He gave up only one game in the shootout and set about systematically hurting his stricken rival.

Federer had a medical timeout. He was not the same when he came back. As Mats Wilander observed on Eurosport, “It seemed like Novak could feel that Roger couldn’t move in to the corners, so he was trying to extend the rallies to get Federer wide on the backhand, or wide on the forehand and Roger was working against that.

“Roger did not serve very well in the tie-breaker in the first set, that was the first time I realised something was slightly wrong. Clearly Roger was okay to put up a great fight. The first two sets were close. If I didn’t think he was injured before I would have never noticed.”

Djokovic explained how he fashioned his 27th win over Federer in their 50th match. “With Roger, you’re going to expect a high level of tennis,” he said. “He will always be aggressive, [apply] constant pressure, serve and volley. I’m not as natural as he is but I tried to stay with him in the rally, move him around, and not make too many unforced errors.”

In fact he kept them down to 18, about half Federer’s count. After the initial blitz, he soaked up 15 aces and fashioned 11 of his own. The second set was competitive but an air of inevitability entered the equation in the third. Djokovic put six aces past Federer and struck 12 of his 31 winners in the home stretch.

As for their mutual bond, Djokovic said, “I hope I made him a 20 per cent better player than what he did to me. He’s one of my biggest two rivals in slams, Roger and Rafa. They made a considerable difference in my mind and how I play. It took a lot of thinking, belief and work to perfect the game and challenge those guys on the bigger stage.”

A more youthful challenge awaits him on Sunday – against Alexander Zverev or Dominic Thiem – and he said, “When you’re young you want everything right away. There’s no waiting. They are among the best young players, and have the potential to be there. One thing I lacked when I was younger was patient and trusting the process a little bit more. But that’s how you learn.”

These two fine champions have learned so much from each other, sharing the same tenacity and drive, but going about their business on court in such contrasting styles. Like Muhammad Ali and Joe Frazier were, they are almost a perfect fit.