Women’s hockey: focus returns to the league as Muckross take on Pegasus 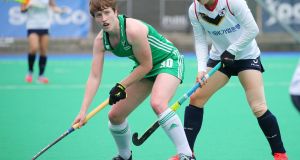 Loreto’s Ali Meeke: she will hope to regain her place in the Irish squad for the Olympic build-up. Photograph: Inpho

The Hockey League resumes on Saturday after its winter break, yet the bulk of the competing players haven’t exactly been idle since the last round of matches in mid-December. Many of them have been in action on the international front with either the Irish indoor or outdoor teams, while there has also been plenty of domestic cup action taking place.

Phase one of Ireland’s build up to the Olympics concluded in South Africa on Wednesday with a 4-1 defeat to Germany, to add to last weekend’s 4-0 loss to the same opposition.

While those results against one of Ireland’s pool opponents in Tokyo will not have cheered coach Sean Dancer, he will have been encouraged by the team’s three victories over their hosts, who are also in the same Olympic pool, as well as a 3-1 win over the Dutch under-21 side.

Both Loreto’s Ali Meeke and Catholic Institute’s Naomi Carroll will hope to regain their places in the Irish squad for the rest of the build-up, Meeke having been omitted for November’s Olympic qualifying games against Canada, while Carroll is back in action after suffering a cruciate ligament injury last year.

The pair were part of the indoor squad that won silver in Bratislava, Slovakia, last weekend and promotion for Ireland to the second tier of the European Championships.

Along with four of their team-mates from that success – Sophie Barnwell (Muckross), Orla Fox (Railway Union) and UCD’s Patton sisters Sarah and Orla – they will turn their attention back to the Hockey League this weekend, with Pegasus, two points clear of Loreto and five ahead of Old Alexandra, the team to catch.

The Belfast side resume their campaign with an away game against Muckross, who are sixth in the table, while Loreto host bottom club Belfast Harlequins.

Third plays fourth in the meeting of Old Alexandra and Pembroke Wanderers; UCD (fifth) are at home to second from bottom Catholic Institute; while Cork Harlequins (eighth) have home advantage against Railway Union. (seventh).