Sam Bennett finishes second Down Under after route mistake 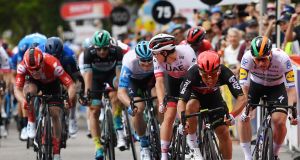 Sam Bennett went agonisingly close to a second stage win in the Santos Tour Down Under on Friday, but was foiled by inaccurate route information in the Australia event’s race manual. Bennett was pipped to the line in Murray Bridge by the Australian Caleb Ewan (Lotto Soudal), and explained afterwards that the roadbook had said that there was 300 metres between the final corner and the finish line.

However when the riders emerged from that corner, he saw that there was only 150 metres left. Deceuninck-QuickStep teammate Michael Morkov had been planning to lead Bennett out, but the Irish road race champion panicked, launched his sprint early but was caught out by the rise to the line.

He said that had the sprint been as the race manual suggested, that he believes he would have won. Instead, with Ewan marking Bennett closely, he was able to capitalise on the mistimed sprint.

“We took control at the front and were really committed, but unfortunately the final was different from what was in the roadbook and I ran out of gas once I got over that crest,” Bennett said.

“But we can look on the bright side of things, which is that we were again present when it mattered and our train worked even better that on the first day. This gives us a lot of confidence.”

Australian climber Richie Porte (Trek-Segafredo) continues to lead overall. Bennett is 70th and is fourth in the points classification. He will have another chance of a stage win on Saturday’s penultimate stage to Victor Harbour.