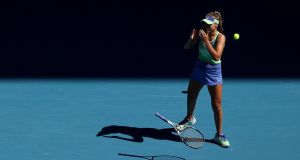 Ashleigh Barty fell just short of pleasing millions of Australians when the American Sofia Kenin gritted her teeth on the hottest day of the 2020 Australian Open to win their semi-final 7-6 (8-6), 7-5 on Rod Laver Arena on Thursday.

Her opponent in the final on Saturday night is Garbiñe Muguruza, who beat the world No 3 Simona Halep in the second semi-final 7-6 (10-8), 7-5. The Spaniard, who arrived with a viral illness and was unseeded in a slam for the first time in six years, took the title favourite out of her stride at key moments in both sets, despite 44 unforced errors in just over two hours.

Had Barty been able to drag the match into a third set, they would have had to take a 10-minute break according to the regulations of the tournament. The heat stress reading hovered just below five, which would have required the match to be suspended. Neither player wanted that. Both fought hard all the way.

Kenin’s Russian-born father, Alex, (who calls her Sonya) arrived in America with $300 in his pocket – mirroring the experience of Maria Sharapova and her father – and he could hardly stop beaming in the stands. The journey has a little way to go, but this was a landmark event, passage into her first slam final at 21, saving two set points in each set against the world No 1.

Those familiar with her from-childhood tennis have always regarded her highly, including her TV inquisitor on Thursday, Jim Courier, who shared a doubles court with her in Florida when she was seven – and they won, against Venus Williams and Todd Martin.

She is hardcore tennis, surrounded by and cherished by the game’s tight-knit community. They will have much to celebrate in the years to come.

Kenin, constantly looking towards her father, said in her courtside interview: “She’s such a tough player. She’s playing really amazing tennis and I just had to find a way. I’m speechless. I can’t believe this. I’ve worked so hard to get here. In the second set, she came up with some really great shots. There’s a reason why she’s world No 1.”

The first set was a struggle for both of them – quite apart from the skin-burning heat, and was settled in the tie-break as Barty, who blew two set points giving the American space to work, abandoned her safety first strategy, went for one big crosscourt winner too many and billowed the net after just under an hour – and just under the century Fahrenheit mark.

As the temperature headed north, stamina was now the third element in this contest. Wheelchair matches were suspended on outside courts about this time. Britain’s Joe Salisbury, who won his doubles semi-final with Rajeev Ram, said: “It’s been relatively cool the rest of the time here, even most of the time being in Australia for the other tournaments. It was a bit of a shock for all of us today.”

Neither Barty or Kenin had returned as well as they would have liked in the first set, and the margins between them were slim, determined by the odd big serve or a mistake under pressure.

On they slugged, Barty breaking early in the second and hanging on to it tenaciously with a slew of backhand slices against an opponent whose young legs were tiring, but whose grit grew by the rally. She wanted to wrap it up in two; Barty needed to get into the third. She saved a string of break points, before thrashing a drive volley into the net.

So close to a grand slam final, Kenin grew in confidence, and won nine of 10 points, holding to love. Barty had to hold her serve just to extend the torture. It was tough to watch as she went 15-40 down and the arena fell pin-drop silent. She saved one match point, persuading an angled forehand into empty space, but stretched on the deuce side, she put her final shot long.

It was ugly. Her compatriot, Brad Gilbert, would have been proud of her. Kenin won, on heart and patience, beating the elements and the crowd favourite. “Both players battled the elements today,” he said later. “She just kept herself in it. When Barty’s level dropped, she found a way. If she was a UFC fighter, she’d get you to tap out.”

The second match was supposed to be a tune-up for Halep against the unseeded Spaniard, but she had to win eight points in a row after being broken to level at 5-all in the first set.

Although they both have won slams on clay and grass, Muguruza has had her measure on hardcourt, winning the three times they met. Now her tennis was unravelling in a blizzard of mistakes – 29 in the first set – before Halep cracked at the end of an absorbing tie-break.

Halep had played with a smile on her face all tournament; now she needed to fight. Shade crept across most of the court but it was still killingly hot in the late afternoon sun. While large swathes of seats in the exposed side of the arena were empty, ticket-holders taking refuge in the cool of the nearby bars, there was nowhere to hide for Halep and Muguruza.

The Romanian was within sight of winning the second set when Muguruza found some of her best tennis to break for 5-all. From there to the end, the match was on a knife edge, each player scrapping for every point. Halep drove her final shot into the net and those who had endured the heat rose to acclaim Muguruza.

Muguruza said courtside: “I wasn’t thinking that I was down. I was thinking, ‘keep going’, fighting with all the energy I had. Luckily I have 48 hours to recover.” – Guardian