Conor McGregor made a quick, violent and extremely successful return to the UFC octagon with a lightning-fast knockout of Donald Cerrone at the T-Mobile Arena getting his career back on track. 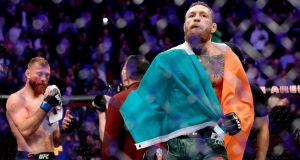 Conor McGregor made a quick, violent and extremely successful return to the UFC octagon with a lightning-fast knockout of Donald Cerrone at the T-Mobile Arena getting his career back on track.

McGregor needed just 40 seconds to dispense with the over-matched and out-classed Cerrone, a series of shoulders to the face and thunderous head kick prompting his quick demise.

With his opponent downed, the 31-year-old Irishman continued to rain down strikes until referee Herb Dean waved the fight off with just 40 seconds on the clock as Cerrone covered up and offered no resistance.

Having become hugely famous and wealthy outside the octagon, McGregor came into this fight looking to reclaim his relevance and reputation, and Cerrone was a perfect choice of partner.

Though vastly experienced and accomplished, Cerrone is not in the same class as McGregor, especially not when the fight stays on the feet and in the centre of the cage.

An excellent grappler, Cerrone could have chosen to take the fight to the ground, but he built his UFC reputation on putting on exciting fights that fans want to see, and UFC 246 was no different.

Nobody has more wins in UFC history than Cerrone, and no-one has more fights either, but his 51st outing will be one Cowboy will ant to forget.

In a rapidly-changing sport, McGregor’s inactivity over the last few years - he fought only once in the cage since his masterful performance to win the lightweight belt from Eddie Alvarez in November 2016 - could have worked against him, but he looked fit and sharp as the contest got underway.

A missed knee gave Cerrone a chance to clinch, but McGregor hit him hard with a series of shoulders, busting his opponent’s nose in the process.

From there it was all downhill for the American as McGregor landed a thunderous kick to the head as the end grew near.

Whatever about his troubles outside the cage, the Dubliner’s near-psychic ability to read his opponent’s movement and react accordingly remains undimmed, and his quick reflexes put him in position to make the most of Cerrone’s mistakes.

Though there was plenty of support for McGregor in the crowd, the atmosphere was nowhere near as electric as some of his previous fights. With no belt on the line, the occasion was robbed of some of its grandeur, but the return of McGregor is still a far bigger story than almost anything the UFC has to offer.

The Irishman exuded calm all week as he fulfilled his media obligations, paying respect to Cerrone for his toughness and longevity, but quietly insisting that he is back, a changed man looking to reclaim what is rightfully his in the fight game.

The victory was McGregor’s first in the octagon since November 2016 in Madison Square Garden when he beat Eddie Alvarez to win the lightweight title and become the organisation’s first simultaneous two-weight champion.

With two more UFC fights and a lucrative boxing match against Manny Pacquaio in the pipeline, the Irishman’s star is on the rise once again, at least in sporting terms.