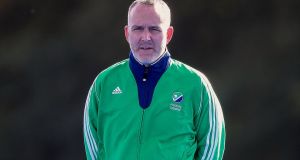 Mark Tumilty will remain as Ireland men’s coach until the end of the Olympic cycle in 2020. Photograph: Bryan Keane/Inpho

Hockey Ireland has made the decision to extend the contract of Mark Tumilty as head coach for the Irish men’s hockey team. The former Banbridge, Lisnagarvey and Ireland player will continue in the role in a full-time capacity until December 2020, the conclusion of the Olympic cycle.

Tumilty replaced Alexander Cox last September after the Dutchman resigned following Ireland’s relegation to the second tier of the European Championships. That ignominy arrived less than five years after Ireland stunned England, then ranked fifth in the world, to claim the bronze medal in the 2015 European Championships.

The Ulsterman stepped into the Irish role last autumn as the interim Irish coach and led the Irish team in their two Olympic Games qualifying matches against Canada. That series ended in controversy when a penalty was awarded against Ireland in the last second of the match.

Canada scored the penalty to draw level on aggregate scores over the two games and subsequently won a one-on-one shoot-out, which earned them qualification for Tokyo 2020.

“I am delighted to be given the opportunity to continue in the role for 2020. I am really look forward to working with a very talented group of players and support staff,” said Tumilty, who played for Ireland in a World Cup qualifier in 1997 and also coached Banbridge to two Irish Hockey League titles and two Irish Cups.

“We need to grow the depth of our squad and to ensure all players fulfil their potential. I want to play an attacking and exciting brand of hockey, with our goal to get the Irish men moving up the world rankings again.”

Hockey Ireland will advertise the full-time head coach position after the conclusion of this Olympic cycle and have called for all suitable candidates to apply when the Tokyo Games have concluded.

Meanwhile, the EY Irish Hockey League takes hockey back outdoors after what must be seen as a successful indoor season at international level with both the men’s and women’s national teams taking to the boards after 30 years.

The men had a successful return to the EuroHockey Indoor Championships in Santander earlier in the month – not having played in an international tournament since 1987 – and winning a bronze medal.

The women’s team were also on form in Bratislava. The squad had five wins from six matches, with tournament winners Spain the only defeat. The squad also achieved promotion to next year’s EuroHockey Championships II.

The outdoor league fixtures are the rescheduled matches from the end of September 2019, with a top of the table clash set for Comber Road where Monkstown travel to meet league leaders Lisnagarvey.

It is the first of two matches between the clubs this month as ’Garvey travel to Dublin in four weeks for the second meeting. The two games could heavily shape the season for both clubs with the Ulster club leading on 19 points to Monkstown in second position on 17 points.

The other top match takes place in Dublin where UCD will try and hold on to their third place in the table with a visit to Glenanne. The students current position would qualify them for the end of season Champions Trophy playoffs.

Equally as dramatic is a bottom of the table clash in Serpentine Avenue. Annadale, with just one point from seven games, face Pembroke, who have five points. Both teams are currently looking at relegation or relegation playoffs with YMCA and Corinthians not far behind on six and seven points respectively. All teams have now played seven matches.