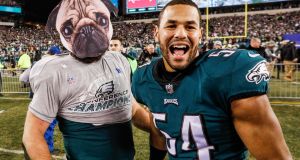 The Philadelphia Eagles’ season did not end six weeks ago in the fading Southern California daylight, when the star quarterback Carson Wentz tore a knee ligament. Nor did it end four weeks ago, when his replacement, Nick Foles, slogged through an ugly victory on Christmas night. Nor did it end last week, when the Eagles, underdogs at home despite holding the NFC’s top seed, eked out a playoff win.

Now the Eagles know for sure when their season will end. No matter what, it will conclude February 4th at US Bank Stadium in Minneapolis, site of Super Bowl LII, just as they said it would, as they knew it would. Philadelphia got there Sunday by trampling Minnesota in a 38-7 rout in an NFC championship that defied all good sense to anyone following both teams over the last month but affirmed all that the Eagles believed.

The Eagles told themselves and each other, and anyone else who would listen, that they would advance, that they could minimize Wentz’s absence because of the remaining talent in the locker room. It convinced their fans, at least. During a stoppage midway through the fourth quarter, as Foles chatted on the sideline with Wentz, a crowd full of people who had waited 13 years for an Eagles Super Bowl appearance started singing along to Tom Petty’s I Won’t Back Down.

In denying the Vikings a chance to become the first team to play a Super Bowl in its home stadium, Foles destroyed the league’s stingiest scoring defence, completing 26 of 33 passes for 352 yards and three touchdowns without an interception. No moment was more symbolic than the first of his scoring passes – a 53-yarder to Alshon Jeffery, who turned down the Vikings last off-season to sign with Philadelphia. Bouncing in the pocket, Foles remained calm despite pressure from Everson Griffen, who smacked the quarterback’s right shoulder and arm, to fling a perfect pass downfield.

That touchdown, which extended the Eagles’ lead to 21-7, sent Lincoln Financial Field into hysteria and began rendering Minnesota’s miraculous last-second victory last week against the Saints as mere anticlimax. As any Vikings fan knows, a real Minnesota Miracle would have been playing in the Super Bowl, something they have not done in 41 years.

The primary symbols of the Vikings’ futility in losing six straight NFC title games – Gary Anderson’s missed field goal and Brett Favre’s interception and Darrin Nelson’s drop – have mainly been their own players. On this night, it was the Eagles who inflicted the misery.

It was Chris Long, who helped force an interception and recovered a fumble. It was Patrick Robinson, who wove through the Vikings on his interception return for a touchdown. And it was, unquestionably, Foles, who flummoxed the Vikings with short passes and long passes and flea flickers, who rewarded the faith – and masterly play-calling – of coach Doug Pederson to continue leading the Eagles down a familiar path.

The last time the Eagles reached the Super Bowl, in the 2004 season, they defeated Atlanta and Minnesota to face New England, just as they have, and will, this season. They will be favoured to lose, again – New England rallied late in the fourth quarter to beat Jacksonville 24-20 in the AFC Championship game – and that will not bother them one iota.

Early in the fourth quarter, fans chanted “We want Brady,” and although they should be careful what they wish for, their optimism is steeped in experience. That December night in Los Angeles, after Wentz left with a knee injury, and after Foles came on to guide them to a division-clinching victory against the Rams, safety Malcolm Jenkins gathered the team in a cramped Los Angeles Memorial Coliseum locker room and peddled positives. Nothing had changed, he told team-mates. The goal remained the same.

Afterward, speaking to reporters, he said, “Do we have a quarterback on the roster? Yes. “OK then,” Jenkins said. The Eagles had Foles, who threw four touchdowns against the New York Giants the following week but muddled through a tight win against Oakland and sputtered against Dallas in Week 17 before being removed. Directing a simplified game plan last week, when the Eagles were the first number one seed in NFL history to be favoured to lose its first playoff game, Foles guided them over Atlanta. But the Vikings, who had escaped New Orleans on a miraculous 61-yard touchdown as time expired?

A convoluted sequence of events, of injuries and trades and signings, produced this implausible matchup of quarterbacks, in Foles and Case Keenum, who took turns backing up each other on the Rams two years ago. “I know this is what all of you guys predicted back in the day,” a defiant Keenum said last week.

Under Keenum, Minnesota acclimated and formed an identity – one that was thumped by the Eagles. Philadelphia has steadily adapted to Foles, who has in turn become more comfortable by the week. Even as the Eagles trailed 7-0 early, it was not his fault. Poor tackling and pre-snap confusion on defence, a dropped deep ball on offense, a 15-yard penalty on special teams – it all conspired to create an ugly beginning for Philadelphia. But a merciless pass-rush can purge those mistakes, and the Eagles have one.

On 3rd-and-8 at the Vikings’ 43-yard line, Long whacked Keenum’s arm, sending the pass fluttering into the belly of Robinson, who returned the interception 50 yards for a touchdown that evened the score at 7-7. The Eagles kept coming – all of them.

Minnesota had dared Foles to beat them, but now the Eagles were daring the Vikings to stop him. Foles executed the run-pass option to perfection, reading the linebacker to either hand off or throw – and, usually – complete short passes. In speaking about him last week, offensive coordinator Frank Reich cited Foles’s pedigree as a coveted point-guard recruit before he chose to play football.

“He can give you the no-look pass,” Reich said. “He can be looking one way and hit a guy. He has that knack and feel.”

Philadelphia pummelled the Vikings’ units, one by one. First, with a 75-yard drive, capped by LeGarrette Blount’s 11-yard trucking of Eric Kendricks en route to the end zone. Then, with Minnesota in the red zone, a strip-sack of Keenum by rookie Derek Barnett – taken with the first-round pick Philadelphia received for trading Sam Bradford to Minnesota – was recovered by Long.

It was coincidence, but not luck. Aside from Wentz, the Eagles had lost several starters to injury: a left tackle (Jason Peters), a middle linebacker (Jordan Hicks), a slippery running back (Darren Sproles) and a special-teams ace (Chris Maragos). Their seasons ended, but the Eagles kept playing and playing, all the way to Super Bowl LII. – New York Times