Caroline Wozniacki shows fighting spirit to advance to third round 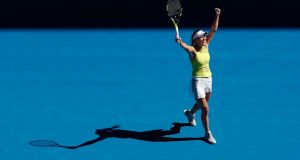 Caroline Wozniacki of Denmark celebrates winning her second round match against Jana Fett of Croatia on day three of the 2018 Australian Open at Melbourne Park. Photo: Michael Dodge/Getty Images

Caroline Wozniacki credited her competitive family for the fighting spirit that helped her recover from a seemingly impossible position against Jana Fett in the second round of the Australian Open.

The second seed looked certain to be making a premature exit when she trailed little-known Croatian Fett 1-5, 15-40 in the deciding set only to save the two match points and reel off six games in a row.

After completing her 3-6 6-2 7-5 victory, Wozniacki revealed she used Fett’s inexperience — the 21-year-old is ranked 119 and had never won a grand slam match prior to this tournament — to give herself the belief to come through.

“Then I felt her tighten up just slightly. I thought to myself, ‘Make her win it, don’t give it to her’. When I managed to get it to 5-2, I said, ‘Okay, I’m still alive. She still has four more balls to win’.

“She’s about to beat the number two player in the world. Obviously she’s about 100 in the world. That’s a big moment for her. I know how it feels whenever you’re close to reaching something really big. I’m very proud of the way I came back.”

Wozniacki hails from a very sporty family — her mother Anna played volleyball for Poland while her father Piotr was a professional footballer. But it was growing up competing against her brother Patrik, who is also a footballer, that drove Wozniacki’s will to win.

She said: “If you lose a game to anyone in my family, you’re going to hear about it for at least a week. That definitely helped me.

“Growing up, I never wanted to lose, and the worst was to lose to my brother. Giving him the opportunity to be ahead was not pleasurable. So I think from that point, you just learn and fight. You don’t give up, even if it’s a board game, tennis, soccer, whatever.”

The day’s early headlines were written by 15-year-old Marta Kostyuk, who defeated Olivia Rogowska 6-3 7-5 to become the youngest player in more than 20 years to reach the third round of a grand slam. The teenager, who was given a wild card into qualifying after winning the junior title last year, is causing quite a stir back home.

She said: “I took my phone, and I had to eat at the same time. My mum told me to leave the phone and eat properly. Because I didn’t have a normal breakfast, that’s why I felt quite bad today on court. I didn’t still reply to a lot of people.”

In the third round, Kostyuk will play her fellow Ukrainian Elina Svitolina, who went into the tournament as the joint title favourite but struggled in a 4-6 6-2 6-1 victory over Katerina Siniakova.

The fourth seed revealed afterwards that she has not been feeling well and was considering pulling out of the tournament ahead of her first-round match.

Speaking about Kostyuk, she said: “The first time I heard about her was when she won here. It’s good, it’s pretty cool that I’m playing someone from my country. It’s going to be very exciting for me and hopefully I can be ready for that match.”

French Open champion Jelena Ostapenko also had to battle, beating Duan Ying-ying 6-3 3-6 6-4 while there was a surprise defeat for Venus Williams’ conqueror Belinda Bencic, who lost 6-1 6-3 to qualifier Luksika Kumkhum.