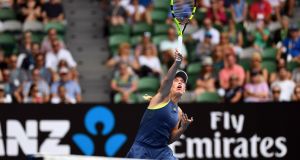 Caroline Wozniacki of Denmark serves against Magdalena Rybarikova of Slovakia during their fourth round clash at the Australian Open. Photo: Dean Lewins/EPA

Caroline Wozniacki is confident but taking nothing for granted as she tries to chase down a first grand slam title at the Australian Open.

The Dane was world number one as a 20-year-old and now, at the ripe old age of 27, is three matches away from lifting the trophy at Melbourne Park.

Playing with “house money” after her recovery from 1-5 and match points down against Jana Fett in round two, Wozniacki hit top form at Melbourne Park in a 6-3 6-0 victory over Magdalena Rybarikova, even making a tweener for the first time in a match.

The world number two won the biggest title of her career at the WTA Finals to end 2017 but does not want to look past her quarter-final clash with Carla Suarez Navarro.

She said: “I think you can tell my confidence is pretty good at the moment. We’ve played four matches. There’s still three to go. There’s still a long way. So I really just focus on the task ahead of me.”

Wozniacki has had to answer questions about her grand slam-winning potential for the best part of a decade but no longer worries about what might be.

She said: “When you put in the work, then you just hope that’s enough. If it’s not, then you go back to work and try and get better. For me, it’s no pressure, just go out there and have fun.”

Suarez Navarro had a much tougher match on Sunday, recovering from a set and 4-1 down to defeat Anett Kontaveit 4-6 6-4 8-6.

The Spaniard and Wozniacki have met seven times before, with Wozniacki winning five but none of them easily.

She said: “We’ve had a lot of tough encounters, three-set gruelling matches. I’m expecting a tough fight. She had a tough season last year. She also had a few injuries. Obviously she’s back playing really well.”

The semi-final looks very likely to be a clash between Wozniacki and fourth seed Elina Svitolina, who breezed past qualifier Denisa Allertova 6-3 6-0 in a match that finished close to 1am.

The Ukrainian, who next plays in-form Belgian Elise Mertens, is through to her third grand slam quarter-final and has never been further.

Svitolina said: “I’m very pleased with the performance. It’s not the first time going into a tournament as one of the favourites. It adds more pressure but also gives you that extra confidence. I’m trying to take one match at a time because everybody is ready to play. I just try to do my best and see how it goes.”

Mertens won the warm-up event in Hobart and is enjoying her best ever run at a slam, beating Croatian Petra Martic 7-6 (7/5) 7-5 in the fourth round.