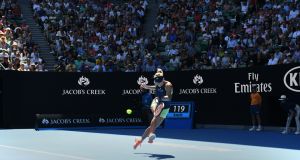 Hsieh plays a completely different game from most of her rivals, relying not on power but a mixture of spins and slices and ball placement that bamboozle opponents and frequently drive them to distraction.

Her scalps in Melbourne had already included Wimbledon champion Garbine Muguruza and Agnieszka Radwanska, and for a long time it looked like Kerber might join them.

But the German has a deep well of confidence after her unbeaten start to the season and kept her composure to turn the match around and win 4-6 7-5 6-2.

The 2016 champion seemed close to losing it as Hsieh continued to spin her magic late in the second set, and the Kerber of last year would surely have crumbled.

But this is a different model and she let out a huge scream of joy and relief after sending a forehand winner down the line to level the match before racing quickly through the decider.

In the last eight Kerber will face US Open finalist Madison Keys, who has played superbly so far this fortnight and blasted her way past eighth seed Caroline Garcia, winning 6-3 6-2.

Keys, who hit 32 winners compared to just nine for her opponent, said: “I’m feeling really good. I feel like I’m playing just solid, consistent tennis. I think today was a good example of that. I served well. I returned well. But I don’t think I played unbelievable. I think I just played really solid and smart.”

The 22-year-old has long been marked out as a potential grand slam winner but her first final experience in New York last summer was something of a horror show as she won just three games against friend Sloane Stephens.

“To have such a great two weeks and then have it end the way that it did, it was really devastating for me, so it definitely took some time to get over,” said Keys.

“More than that, it was realising that it was so unexpected, and I was so happy to even get there in the first place after having such a rough beginning of my season, that after telling myself that a couple of times I definitely finally moved on and just wanted to put myself in the same position again so that maybe I could have a different outcome.”