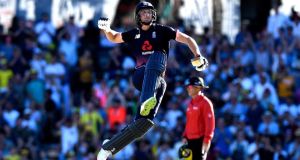 Buttler launched an audacious counter-attack to finish with 100 not out in 83 balls as the tourists posted a winning total of 302 for six, Chris Woakes racing to 53no in a dizzying stand worth 113.

Buttler, whose middle-order masterclass included six fours and four sixes, was also involved in the key moment of the Australia innings, claiming a hotly-disputed catch to see off home skipper Steve Smith.

England’s 16-run success was all the more remarkable given Liam Plunkett’s untimely exit with a hamstring injury, leaving his side a bowler short with more than eight overs to fill.

With a 3-0 lead and two games to go England head to Adelaide with the prospect of whitewash, and a measure of Ashes redemption, in the air.

It is tempting in retrospect to view the first 22 overs of the England innings as a phony war, a scene-setter for the brilliance to come, but that would be unfair on Australia’s reunited seamers Mitchell Starc, Pat Cummins and Josh Hazlewood.

None of England’s top five found any real fluency after being sent in for the first time in the series, though Eoin Morgan (41) and Jonny Bairstow (39) chiselled out hard runs.

Joe Root’s day had started with rugby league star Sam Burgess presenting his 100th ODI cap, a more memorable moment than any in his knock of 27.

It was not until Buttler heaved Marcus Stoinis for the first six of the match in the 28th over that the balance began to shift.

With a tidy 50 already under his belt Buttler began to dust down his party pieces, ramping Cummins over his own head for four then driving Hazlewood hard and flat for six.

That was the pivot point, with Australia suddenly unable to keep a lid on Buttler.

There was another flat six off Hazlewood, back-to-back fours off Starc and then 20 runs off four successive Cummins balls — two crashing into the ropes and two sailing over.

Woakes played his part to perfection, a short-arm pull for six the best among a handful of authoritative blows.

His efforts almost denied Buttler the chance of a fifth ODI ton but he dashed through for two from the last ball of the innings to claim his just reward.

In all, the pair added 102 runs in the final 10 overs, a remarkable effort given their team-mates’ struggles on an awkward surface.

Australia’s chase was led in familiar fashion by Aaron Finch, who followed up hundreds in Melbourne and Brisbane with a confident 62.

England had already removed David Warner and Cameron White, one apiece for Woakes and Mark Wood, but Finch — lbw sweeping Adil Rashid — was the prize scalp.

By then Plunkett had already left the field, stretching England’s slight bowling options.

Root, whose occasional off-spin struck gold at the Gabba, stepped up again but his 8.4 overs were milked for 60.

Smith (45) appeared to be building a winning position alongside Mitchell Marsh (55) but when he aimed a wild drive at the returning Wood it allowed Buttler to stoop for a much-debated catch.

He was given out on the field but replays proved unhelpful and when third umpire Kumar Dharmasena upheld the verdict boos rang around the ground.

Australia were left needing 122 in 16 overs and despite the best efforts of Tim Paine and Stoinis, who cracked a punchy 56, Woakes and Wood closed things out with minimal drama.