‘He took a bullet for all of us. Literally’ - LeBron pays tribute to Martin Luther King 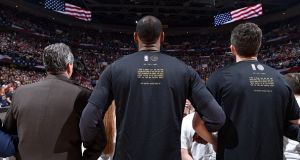 LeBron James of the Cleveland Cavaliers stands for the National Anthem before the game against the Golden State Warriors. Photograph: Getty Images

LeBron James has spoken about the corrosive effects of racism – and aimed criticism at Donald Trump – on Martin Luther King Day.

“The state of racism will never die, but what we cannot do is allow it to conquer us as people,” James said before the Cleveland Cavaliers’ game against the Golden State Warriors on Monday night. “We can’t allow it to divide us. The guy in control has given people and racism … an opportunity to be out and outspoken without fear. And that’s the fearful thing for us because it’s with you, and it’s around every day, but he’s allowed people to come out and just feel confident about doing negative things.

“We can’t allow that to stop us from continuing to be together and preach the right word of living and loving and laughing and things of that nature. Because would we want to live anywhere else? I don’t think so. We love this place.”

On Sunday Trump insisted he is “not a racist” after he was widely condemned for reportedly describing some African, Central American and Caribbean countries as “shitholes”.

James, who has been a consistent critic of Trump’s presidency, made his feelings clear again on Monday. “We are in a difficult state right now as Americans as well with the leader of our country,” said James, a three-time NBA champion and one of the greatest basketball players of all time.

“But us, like I said, no matter the religion, no matter the shapes and sizes, we all have to continue to come together and shine a brighter light on, you know, I mean, [I don’t want to] use the word stupidity, but that’s basically what it comes down to.”

This year marks the 50th anniversary of King’s murder and James said he was aware of the civil rights leader’s sacrifice. “He took a bullet for all of us. Literally. In the rawest form that you could say that. He literally took a bullet for us. And for us to stand here even though we’re trying to be divided right now by somebody, today is a great day for people to realise how America was built and how we all have to stand united in order to be at one.”

The majority of NBA teams are playing on Martin Luther King Day, and James said it was an “unbelievable” tribute from a league in which 75 per cent of players are black.