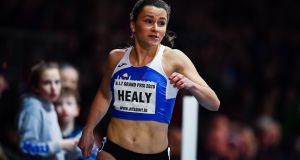 There is a reason some records stand in the books longer than others. And such was the quality of the Irish women’s indoor 200m record that it stood for 17 years, before in one perfect sweep of a lap Phil Healy cleaned it off again at the AIT International meeting in Athlone.

Not long after that came a reminder of another quality record, as Ciara Mageean fell just short in her quest to clean off the Irish indoor 3,000m mark – still coming away with an impressive win and both a stadium and personal record of 8:48.27.

Healy duly clapped herself over the line as she won the 200m in 23.10, improving the record of 23.17 which had stood to Ciara Sheehy since 2003, also delighting the Athlone crowd with the first home win of the night.

“Yeah, buzzing, absolutely, to run that in such a great atmosphere, in such a great meeting,” said Healy, who already holds the Irish 100m and 200m records outdoors. “To get 23.10, a national record and a win, is absolutely super. I love racing 200m indoors, had a few things to correct from my last few races, but with that crowd to bring me home, it’s absolutely unreal.

“It’s been a really good winter. Last year I had a bit of a hiccup along the away, breaking my foot, and found it very hard to come back and get the consistency. I love a home crowd too, and to have an international race like this on our doorstep is super.”

After enjoying a record start in Boston last month, Mageean came to Athlone looking to repeat that form when doubling her usual distance, and after feeding in and off that home crowd, produced an excellent win in 8:48.27: so that record still stands to Mary Cullen, and the 8:43.74 she ran in Boston in 2009, although Mageean easily improved indoor best at the distance is 8:55.09, set in New York five years ago now.

“Yeah, absolutely delighted,” said Mageean, who hit the front from halfway and had to work hard with very stride to hold off Britain’s Rosie Clarke, who took second in 8:49.49.

“I came here with the aim of running fast, trying to get a PB, and I achieved that, a stadium record too, and close to that Irish record which I wanted. But that’s held by a fantastic athlete in Mary Cullen, and it’s not something that’s going to come easy. So Mary holds onto it for a little bit longer, and hopefully I’ll get it in the future.

“But very happy with that performance, that’s two PB’s so far this season, a great start to 2020. All you can do is take those incremental steps towards being your best, and thanks to the crowd too, I knew Rosie was fit today, and sitting on me, so believe me the cheer of the Irish crowd carried me home there that last 200m.”

It was in Athlone last year where Mageean ran an Irish indoor 1,500m record of 4:06.76, before improving it to 4:06.42 in Boston last month; she also holds the Irish indoor mile record of 4:28.31 and was looking to complete a sort of treble of middle distance records.

Thomas Barr was also back in Athlone after tumbling out of the 400m flat a year ago, and stayed on his feet this time to also come away with a personal record of 46.44 in third – the win going to Tony van Diepen of the Netherlands in 46.17, edging out European champion Paval Maslak of the Czech Republic (46.28).

“Yeah, that was good fun,” said Barr. “I knew training was going well during the week, I ran a pretty quick 300m in training, and was hoping to put that to the test, and use it to my advantage, with my strength in the homestretch. I didn’t quite have the legs to match those first two speed merchants, but I stayed on my feet this year, came with a PB, so great way to kick off the year. That’s a really good benchmark for where I’m at this year.”

The organisers are also lined up Ethiopia’s Samuel Tefera for an attempt on the world indoor mile record, the 20-year-old chasing the 3:47.01 set last year by his fellow countryman Yomif Kejelcha, only that proved a proper quality record too as Tefera fell well short with his 3:55.90 – Dublin’s Brian Fay giving brave chase over the last lap and within reach it seemed of a sub-four minute mile, only to miss out on the line.