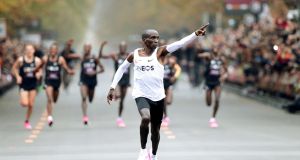 World Athletics has insisted it will not let running-shoe technology spiral further out of control despite the release of another “gamechanging” Nike marathon shoe on Wednesday.

Track and field’s governing body also rejected claims that the US company might have had advanced warning of its new regulations, announced last Friday, after the company’s new Air Zoom Alphafly Next% slipped just inside the new 40mm limit for heel size.

A World Athletics spokesperson told the Guardian: “We spoke to several shoe companies, including Nike, a few days before we released our new shoe regulations to let them know what we were planning. But that was the extent of it.”

However a World Athletics spokesperson insisted all new shoes that use carbon plates would be part of a big scientific project in the months ahead – and its rules may yet change if one shoe has too much of an advantage.

“The working group created the rules based on what is already readily available,” the spokesperson said. “We are now conducting detailed scientific research that will be finished this year on all the new shoes on the market to determine the extent to which they can improve performance. If in the process of that research we found that a certain shoe gave too much energy return compared to others on the market, say, we would look at our regulations again.”

Nike’s Vaporfly shoe has revolutionised marathon running since it was introduced in 2016, with both Eliud Kipchoge and Brigid Kosgei setting world records wearing them. However the Alphafly is rumoured to be another great leap forward, with some suggesting it could improve running economy by 7-8 per cent compared to the 4-5 per cent offered by the Vaporfly. – Guardian