America at Large: James Dolan has presided over two decades of astonishing dysfunction 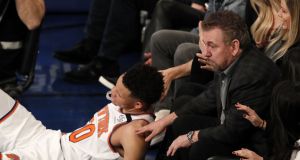 For creating a culture so toxic none of the game’s flagship players ever want anything to do with the Knicks, James Dolan pays himself $25m a year. Photograph: Paul Bereswill/Getty Images 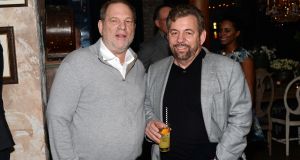 James Dolan has been cited as a close friend of Harvey Weinstein. The pair are pitured in 2015 in New York City. Photograph: Andrew Toth/Getty Images 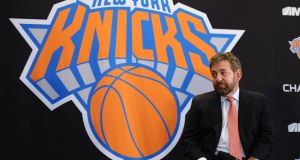 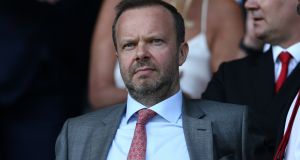 “Imagine the optics of Ed Woodward or one of the Glazers having Roy Keane manhandled out of Old Trafford.” Photograph: Jan Kruger/Getty

As the clock ticked down on the New York Knicks’ 36th defeat from 49 games last month, an all too typical 21-point rout by the Memphis Grizzlies, the Madison Square Garden crowd started to turn on the club owner James Dolan. He was sitting in his usual courtside seat as, not for the first time, a chorus of “Sell the team!” began to echo around the so-called most famous arena in sports. When Dolan heard a teenage boy sitting near him joining in with the chant, he screamed at security to do something and the goons lifted the kid from his seat and detained him for questioning. Dissent will not be tolerated.

A billionaire setting his goons on an adolescent fan venting his frustration is the kind of bullying cameo that explains why Dolan may just be the most despised owner in all of American sport. That’s a competitive enough category but here is a Richie Rich caricature gifted the club by his plutocrat father in 1999 who has since presided over two decades of astonishing dysfunction, serial under-performance, deranged decision-making, and recurring mediocrity. For creating a culture so toxic none of the game’s flagship players ever want anything to do with this beleaguered outfit, he pays himself $25m a year.

Three years ago, Dolan had Charles Oakley, a bona fide Knicks legend from a better time, ejected from the Garden for criticising him about what he had done to the club. Imagine the optics of Ed Woodward or one of the Glazers having Roy Keane manhandled out of Old Trafford right now and you get the picture. The Manchester United analogy works in other ways too. Despite reaching the NBA’s bloated play-offs (more than half the teams qualify) just five times in 20 years (the last appearance in 2013) and failing to contend for a title since the last century, the Knicks are worth an estimated $4bn, making it the most valuable club in the league. Apparently, this brand is too strong to be adversely impacted by the team’s historic awfulness.

The quality of the players on the court and the fact that they are farther away than ever from competing with the sport’s elite scarcely hurts the attendance either. Sure, the Garden doesn’t quite sell out anymore yet 95 per cent of seats for all 41 home games are full and they still draw an average of just under 19,000. Startling numbers when you consider last season they offered their supporters the worst campaign in team history, and this year has been only marginally better. The fans are as loyal as the owner is stubborn, petty, out of his depth, and too rich (a largely inherited net worth of $1.5bn) to care.

Dolan is the man who once fired a female executive for reporting that then coach Isiah Thomas had sexually harassed her. Her dismissal cost the club almost $12m when she sued and, a few years later, the tone-deaf owner appointed Thomas as president of the New York Liberty, the Knicks’ WNBA affiliate. Then again, Dolan has also been cited as a close friend of Harvey Weinstein in dispatches from that particular horror story, and several songs by the glorified pub band he fronts, “James Dolan and The Straight Shot”, have inexplicably featured in films produced by “The Weinstein Group”.

A recurring feature of the Dolan era has been the Knicks’ inability to land A-list talent, a failure that has caused it to overpay for lesser players. More than once LeBron James was supposed to be on the way but he was far too savvy ever to be suckered in. More recently, Kevin Durant’s free agency prompted the usual flurry of rumours which intensified after Dolan went on radio hinting a truly big name was, indeed, on the way. Durant subsequently went across town and signed for the Brooklyn Nets, a team with way less history but an outfit unencumbered by an owner constantly trying to find new ways to break a really expensive toy given to him by his father.

In a classic diversionary tactic, Dolan responded to the latest demands he sell up by firing the club president and has hired Steve Stoute, a music and advertising executive, to help rehab the Knicks’ parlous reputation. Stoute counts Jay-Z, the NFL, and Nike among his clients and has a proven track record. But this is a rather special case. A few years back, the Knicks ran a slick television advertising campaign in which fans waxed lyrical about their passion. Turned out that in a city of 8m people where basketball has always been close to religion, they had to hire professional actors to pretend to like the club on camera. Just another in a litany of embarrassments great and small that have pockmarked Dolan’s reign.

Right now, the 64-year-old has reiterated he has no desire to sell and there is talk he may hire Leon Rose, arguably the NBA’s most influential agent, as team president. The local tabloids also speculate that big names like John Calipari or Jeff Van Gundy (who was in charge the last time they reached the finals) are interested in becoming the 14th head coach in two decades. A damning statistic. The long-suffering Knicks fans read this stuff and weep. They know the names don’t matter as long as Dolan’s remains over the door.

The beatings will continue. Morale is unlikely to improve.