Fair is unfair: the pros and cons of the ‘Nike Vaporfly rule’

Ian O’Riordan: Vaporfly shoes are not banned but Eliud Kipchoge’s Alphafly are 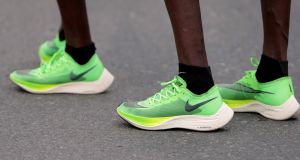 World Athletics opted not to ban the Nike Vaporfly shoes on the basis they have been 'generally available for a considerable period of time'. Photograph: Christopher Pike/Reuters

At some point before the 1980 Olympics in Moscow a designer from Nike wrote to Steve Ovett and asked had he any ideas for a new spiked running shoe that might offer some advantage over his rivals. Given the essentially basic construction of any such spiked shoe there wasn’t much room to play around with, although Ovett had a suggestion nonetheless.

At full flight around the final bend – and remember Ovett had a tremendous finishing kick – he sometimes found the tongue of his spike slipped to the side, slightly reducing traction. Might there be any way of sealing the tongue to the laces?

The Nike designer suggested stitching a small loop to the top of the tongue, slipping the laces through it, thereby adding some extra security. Ovett won the 800 metres in Moscow wearing that very spike, beating into second his close rival Sebastian Coe (who did however win the 1,500m). Fair or unfair, advantage or not, practically every running shoe or spike sold in the years since now has that loop on the tongue.

A frivolous example perhaps, and yet another reminder that when it comes to the constant evolution of the running shoe, Nike have always been at the front of the pack – at least since first taking on Adidas in the 1970s, who up until then had been setting the pace (the company founder, Adi Dassler, the first to switch from leather to canvas and rubber, also introducing the first removable spikes).

For Bill Bowerman, one of the co-founders of Nike, much of the early innovation came down to trial and error. Around 1971, using his wife’s Belgian waffle iron, he melted strips of rubber to create the Waffle Trainer, promising a new lightweight grip and faster, more economical running. This was the shoe that first set Nike on the road to where it is now.

Still Nike weren’t the only ones at it: at some point before the 1984 Olympics in Los Angeles, a designer from New Balance asked John Treacy had he any ideas for the shoe he’d be wearing in the marathon, Treacy’s first attempt at the classic 26.2-mile distance. Given the expected conditions, they came up with a lightweight and more breathable material for the upper of the shoe, custom built for Treacy. Readily available on the retail market or not, that’s the shoe Treacy wore to win his Olympic silver medal.

There’s been a lot more innovation in the years since, part of which has been about deciphering what is folly and what is not. I remember being flown to London around 2002 for the launch of the Adidas a3 (pronounced “a-cubed”), the shoe which declared itself the “benchmark technology for the coming years” and “as close as you will get to shoes that do the running for you” – and let’s just say the a3 didn’t exactly live up to that billing.

It’s also not long since the new benchmark in running technology was considered to be the bare foot. Christopher McDougall sold a lot of copies of Born to Run on the idea that going back to barefoot running was the way forward, at least if the Tarahumara Indians were anything to go by (Nike got in on that act too with their ‘Free’ range) only that turned out to be something of a backwards step.

Nowhere in their amended rules on shoe technology announced on Friday do World Athletics mention the Nike Vaporfly, only this is clearly the shoe in mind when introducing new restrictions on midsole thickness (still a hefty 40mm), while also limiting to one the use of any rigid embedded plate or blade within the shoe: the Nike Vaporfly rule, as it may always be known.

Effectively this means the Nike Vaporfly – both 4% and Next% models – remain perfectly legal, as will all the records and times clocked in athletes wearing them, most notably the two marathon world records (the 2:01:39 Eliud Kipchoge ran to win the 2018 Berlin Marathon, and the 2:14:04 clocked by Brigid Kosgei also from Kenya to win the Chicago Marathon last October). Given the now widespread use of these shoes, from the very elite all the way down to the local parkrun, any talk of an outright ban was always wishful thinking.

What the rule will prohibit, thankfully, is any further midsole thickness above 40mm such as seen on prototype Alphafly, worn by Kipchoge in that increasingly clear publicity stunt and thankfully “unofficial” 1:59:40 marathon run in Vienna last October.

On that basis, World Athletics are also putting limits on any new prototype running technology that is not yet available: beginning from April 30th, any shoe must have been available for purchase by any athlete on the open retail market (online or in store) for a period of four months before it can be used in competition (aesthetic or medical personalisation is allowed, once also staying within the amended rules).

More significantly, perhaps, World Athletics do admit (at least via the assistance review group that advised them on their amended rule), that “there is independent research that indicates that the new technology incorporated in the soles of road and spiked shoes may provide a performance advantage” and also that “there is sufficient evidence to raise concerns that the integrity of the sport might be threatened by the recent developments in shoe technology”.

Any new shoes that emerge on the market may be subjected to further research on the exact performance advantage, only fair or unfair – or fair is unfair, depending on your point of view – the Nike Vaporfly is here to stay for the time being at least.

“As we enter the Olympic year, we don’t believe we can rule out shoes that have been generally available for a considerable period of time,” said World Athletics president Seb Coe. “But we can draw a line by prohibiting the use of shoes that go further than what is currently on the market while we investigate further.”

In other words, these rules only apply for elite competition purposes, for the winning of medals, the setting of records, the collecting of prize-money etc. There is still nothing to stop anyone from running in a shoe such as the Nike Alphafly for their own personal achievement, should they ever be released on the open retail market. Fair or unfair?