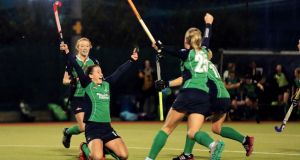 When she found herself marking Alex Speers in a club match last weekend it was, says Audrey O’Flynn, “like Reeling in the Years”, the pair having won almost 300 caps between them before they both retired from international hockey in 2014.

“We were good friends before the match, probably not after. I knew how to poke the bear,” she laughs, her side, Old Alexandra, having beaten reigning Hockey League champions Pegasus 2-1 in their game in Belfast.

While Speers carried on playing club hockey after calling time on her Ireland career, O’Flynn took a very different path, quitting the sport completely to take up rugby Sevens. Initially she was among a group of sportswomen from other codes offered the chance to try out the sport, and soon enough she had established herself in the Ireland squad.

Last month, though, the 32-year-old returned to hockey in the colours of Old Alexandra, those early weeks proving more than a little painful.

“I literally hadn’t picked up a stick in over five years, so I was using muscles I hadn’t used in all that time. After my first day training with Alex, when I got in the door of my apartment I just lay on the floor. My body just wasn’t used to it any more.

“I thought coming back would be easier than it has been, some things have come back quickly, others not so much. Training the other night, I think the ball hit my foot around 40 times. I stopped just short of trying to tackle people with my hands,” she laughs. “So yeah, I’m still dusting a lot of cobwebs off.”

Her rugby days are, she says, done, and while she loved her time playing the sport, injuries took their toll in the end.

“It was just one after another. This time last year I had an operation on my shoulder and was out for five months, I just got back in time for the Olympic qualifier. I broke my leg about three years ago, I had issues with my back as well, it was constantly going in to spasm.”

“I probably ended up playing more games for Ireland than I trained with the squad. It was just a cycle of playing in tournaments and breaking down afterwards. It became frustrating because when you’re not training with the team you just don’t feel you’re as ready as you need to be, to be at your best. I was constantly doing just bike sessions, I’d say I did a Tour de France every few months. I was unlucky, but I suppose age wasn’t on my side either.”

Her rugby experience ultimately ended in disappointment last July when a defeat by England in the quarter-finals of their Olympic qualifier in Russia put paid to Ireland’s hopes of making it to Tokyo.

“It was hugely disappointing because we fancied our chances, we’d gotten some good results going in to the qualifier so there was a real belief that we could do it. But it wasn’t to be, and even though my dream was to make it to the Olympics, I have no regrets at all. I loved the rugby, it was a new challenge at a time when I needed one, it was a great set-up, with all the resources available to us.”

“People might say, ‘oh, if she’d stuck with the hockey she might be going to the Olympics now,’ but you just never know – I might not have been picked! But I hadn’t been enjoying the hockey, maybe looking back if I’d just taken a six month break from it I might have got the enjoyment back, but I think I just needed a change. So, I’m happy out with my decisions.”

“The only thing I’d be able for after this is lawn bowls,” she says, “although I was beaten by a six-year-old at Christmas, so . . .”

The Dublin-based teacher, a native of Dripsey, Co Cork, came within one game of qualifying for the Olympics back in 2012 when Ireland were beaten by Belgium in the final of their qualifier, a tournament in which the penalty corner specialist top-scored with eight goals in five matches. Unbeknownst to her, she broke her jaw in the final, playing on until the end.

She admits, then, to feeling just a little bit of envy last November when she watched an Irish team with plenty of former team-mates, including her new club-mates Nikki Evans and Deirdre Duke, win that shoot-out against Canada and book their spot in Tokyo.

“When I was in London and saw them get the success in the World Cup I was very jealous. And seeing them qualify for the Olympics . . .. yeah, jealous! But I was absolutely thrilled for all the players, it’s brilliant for them and brilliant for the sport, the numbers playing it have sky-rocketed.”

Any plans on reeling in the years and getting yourself back in the Irish squad?

“Ha,” she laughs. “I’m just concentrating on getting in the Alex team! And that won’t be easy – the competition in the squad is fierce, the standard of hockey is brilliant, so I have my work cut out.”