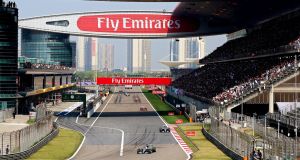 The 2020 Chinese Formula One Grand Prix has been postponed due to the outbreak of the novel coronavirus in China. Photograph: EPA

The Chinese Grand Prix has been postponed after the outbreak of the coronavirus. There is a possibility that the race, which was due to take place in Shanghai on April 19th, could be rescheduled for later in the season but it is unlikely. The health threat has also raised doubts about the feasibility of the inaugural Vietnam Grand Prix which is set to take place on April 5th.

The coronavirus is responsible for the deaths of 1,016 people in China and Shanghai is only 500 miles from Wuhan, where the outbreak began. F1 management insisted on Tuesday night that no decision on the race had been made, but an official announcement was made early on Wednesday afternoon. Two weeks ago Dr Sergio Brusin, a senior expert at the European Centre for Disease Prevention and Control in Stockholm told the Guardian he expected the event to be cancelled, warning of the dangers of mass gatherings of people.

An FIA statement read: “In view of the continued spread of novel coronavirus and after ongoing discussions with the Federation of Automobile and Motorcycle Sports of People’s Republic of China (CAMF) and Shanghai Administration of Sports, the Chinese Grand Prix Promoter, Juss Sports Group, has officially requested that the 2020 FIA Formula One Chinese Grand Prix be postponed.

“The FIA, together with Formula One, has have jointly decided to accept this official request from the promoter and postpone the 2020 FIA Formula 1 Chinese Grand Prix, originally scheduled for April 19th. As a result of continued health concerns and with the World Health Organisation declaring the coronavirus as a global health emergency, the FIA and Formula One have taken these measures in order to ensure the health and safety of the travelling staff, championship participants and fans, which remains of primary concern.”

The Russian GP set for September and which is scheduled between the Singapore and Japanese GPs had already ruled out exchanging dates with China. Finding another weekend that would work logistically for transporting teams and equipment will be very difficult and almost certainly require them to commit to racing for three consecutive weekends.

The grand prix is the latest in a series of events that have been cancelled because of the coronavirus. The Shanghai authorities suspended local sporting events in the city earlier this month. Formula E cancelled its meeting set to be held in Sanya and the World Athletics Championships in Nanjing have also been called off, both events set to take place in March.

Vietnam’s first F1 grand prix is due to take place in Hanoi, which is located 100 miles from the Chinese border. As of Wednesday the country has confirmed 15 cases of the coronavirus.